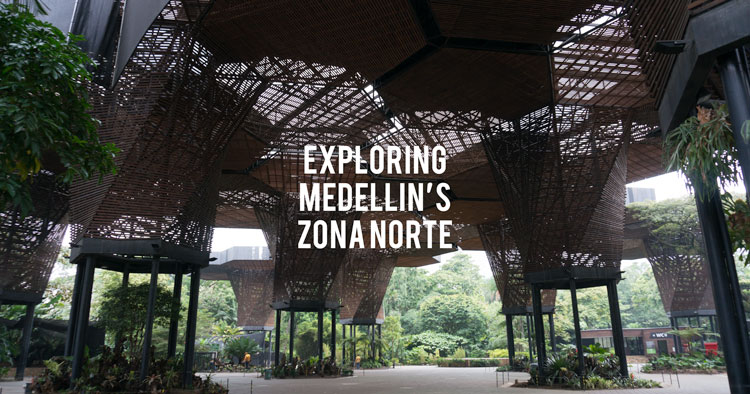 A few metro stops north of the chaotic hustle and bustle of Medellin’s El Centro (downtown), lies Zona Norte, where you’ll find a cluster of interesting places dedicated to learning, fun, or relaxation.

Zona Norte is the area immediately adjacent to the Universidad de Antioquia, one of the city’s most prized universities.

While some out of town visitors may be interested in enrolling in classes at the local university, the main attraction for foreigners is a series of museums and other attractions that will keep you entertained for at least a full day.

All of the sites are clustered together and make for a full and complete day, no matter you choose to do.

The Botanical Gardens are unlike any other space in Medellin. Although it isn’t the largest botanical garden ever made, it is a sizable green space set aside in this big city.

It offers a fairly wide range of plants from the desert area, to the jungle, to the orchid exhibits, and more.

The Botanical Gardens are one of my favorite places to escape to and they are a great place to bring out of town guests for a different look at Medellin.

I would say the most striking attraction is the large roof over the orchid space, which stands high overhead in geometric shapes, and provides shade to the orchids below.

My favorite part though is the area surrounding the small lake. Here you’ll find a plethora of wildlife, including many kinds of birds and turtles, but it’s the iguanas that steal the show.

If you’re lucky you may even see a pair of macaw parrots in the gardens. The macaws aren’t native to Medellin but were released by the zoo many years ago, and they have taken up residence here.

The butterfly house is another popular attraction, where you can see some impressive and different butterflies feeding on fruit and flowers. The most striking butterfly is probably the “owl” butterfly which has giant eyes on its wings to simulate an owl face and scare off predators.

Jardin Botanico is one of the must-see places in Medellin, in my opinion. It’s also quite nice that the entrance is absolutely free.

Parque Expora, located just across the street from Jardin Botanico, is an interactive science museum.

I hear some of you saying that that sounds pretty boring, but it’s actually pretty awesome. Medellin may not have the most museums, but it does museums really well by featuring interactive elements that engage the visitor.

Parque Explora is one of the best in terms of mixing fun, interactive elements with learning.

Within the museum you’ll find various exhibits that touch on everything from dinosaurs, to physics, to neuroscience, and communication.

The museum also features a sizable aquarium section with all sorts of colorful fish, and even a section that showcases fish from the Amazon river.

Around the corner from the aquarium, you’ll find an exhibit full of snakes, lizards, frogs, and spiders, where you’ll get a good idea of some of the creepy crawlies that live in Colombia.

The coolest ones have got to be the tiny but colorful poison dart frogs. The most poisonous frog in the world is from Colombia, a bright yellow little thing that packs enough poison to kill between 10 and 20 humans.

I wasn’t sure what to expect when visiting Parque Explora, but I found it to be surprisingly fun and informative.

Medellin’s Planetarium sits just across the street from Parque Explora (the Universidad metro station sits between them).

The Planetario came under the management of Parque Explora in 2011 who took on the role of modernizing and expanding the educational components.

Like Parque Explora itself, the Planetarium features a great deal of interactive exhibits that help illustrate more complex scientific ideas like the Coriolis effect or what causes the Aurora Borealis.

The main draw of the planetarium however is the large 57 foot dome that envelopes the viewers in an IMAX like experience.

The movies are on rotation, but they will undoubtedly take you on an immersive experience through the cosmos. The films were in Spanish only, when I visited, but even if you don’t speak Spanish, it’s still pretty cool.

The planetarium also occasionally hosts special events at their theater. I had the chance to go see Pink Floyd’s Dark Side of the Moon, and that was a lot of fun.

Those are the “big three” attractions for out of town visitors, I would say, but they aren’t the only thing to explore in the area.

Right outside of the planetarium is Parque de los Deseos, an expansive plaza where families and couples hang out into the evening. The space is lovely, and occasionally they even do open-air movie nights projected on the side of the building.

Nearby you’ll find the Parque Norte, which is a modest amusement park, but probably of limited interest unless you have children.

You’ll also find the Museo Cementerio San Pedro where some of Medellin’s most famous figures are buried in elaborate tombs. The space itself has also become an important event and cultural venue, strangely enough.

All-in-all the Zona Norte is a place full of interesting things to see and do, and you can do quite a lot within a very small area.

While it’s possible to dash through everything in one day, you would get the most out of your experience by breaking it up into at least two days of exploration.