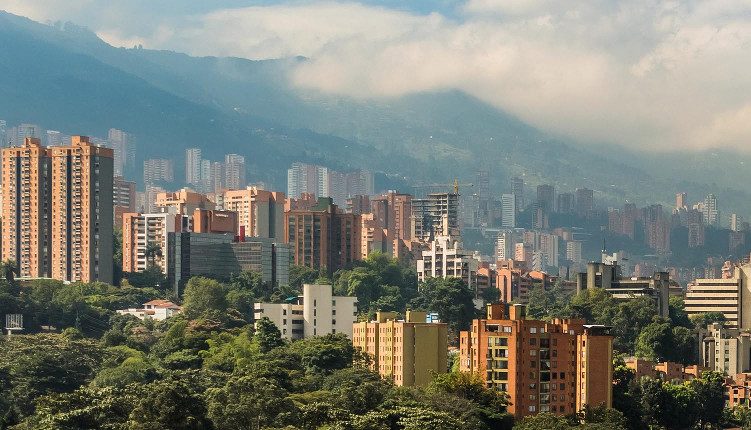 With an average temperature through the day of 72°F (22°C) and a normal humidity of 65-70%, you can’t really say that Medellin is a cold city (unless it’s a gray and rainy evening), but compared with other cities at the same altitude and proximity to the equator, the weather in Medellin is quite agreeable.

As a side note, if you would have visited Medellin in the 1920’s and 30’s, you would be surprise at how different the climate was back then, as there were complete industries dedicated to making silk gloves, scarfs, and big cotton sweaters that were normally used. It wasn’t until recently when it got warmer, that the city got one of its most famous nicknames, the City of Eternal Spring.

The weather is almost the same every month of the year, but the main variable from month to month is the change in the frequency of hot days and the amount of rain.
The frequency of the rainy days is almost constant throughout the water, but January and February are months that are the driest with a below average rainfall, and might be considered the most reliably good weather if you are planning a trip to Medellin.

The temperature is what many would call the sweet spot of comfy living with a medium to hot temperature, and just four particularly hot months, most notably in December and January when “La Niña” is present and again from June and July which is what you would consider the normal summer time.

During a normal day of the year, the midday temperature reaches around 82°F (28°C), but in those hotter months it may reach the upper eighties to mid-nineties (32-36°C) max.

As I said before, the frequency of the rain is relatively constant through the year, except in January and February, but the number of average inches of rainfall changes greatly during the months of May and October, which would be considered the rainy season, and which brings in the most rainfall with nearly nine inches of rainfall respectively, which is well above the average of 5.79 inches per month.

During the rainy season it can be particularly annoying to go out, when the downpour might hit at any moment, or there can the floods or massive rain storms that get you stuck inside wherever you are as you wait it out. On the plus side, the rain typically doesn’t last long, usually one or two hours tops, but it’s still kind of a pain when that happens.

There are differences in terms of heat in different parts of Medellin, for example, El Centro is one of the hottest parts of the city, due to the pollution, sheer amount of concrete, and the general lack of trees.

But as everyone knows, the parts of the city with the most trees, parks, and greenery are often way cooler than heavily developed areas that don’t offer this respite from the heat. In this regard, the most pleasant neighborhoods are usually places like Laureles, Conquistadores, El Poblado, and several others that have this important characteristic.
In the Metropolitan Area, the city of Bello is also comparably hotter than Medellin, but Envigado and Sabaneta are a bit cooler. The difference isn’t huge, but it is noticeable.

In the end you just have to take into account that this is more of a tropical, warm city with several rainy days, so for the everyday person I would recommend several things like:

Overall, the weather in Medellin is quite agreeable, although it has been trending hotter. Many old-timers in Medellin yearn for the past when it was truly a climate that was fresh and spring-like, whereas now it might be better characterized as the City of Eternal Summer.