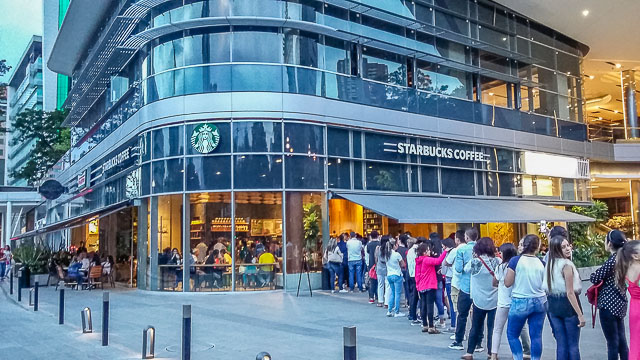 The famous Seattle-based coffee chain Starbucks opened their first store in Medellin along the Golden Mile — the Milla de Oro, with a few more stores opened and some more on the way.

The Milla de Oro store marks their 11th here in Colombia and is their first stop outside of Bogota.

The store is located along the Milla de Oro (the Golden Mile) on Avenida Poblado just a few blocks north of the Santefe Mall. It is located immediately adjacent to the Krispy Kreme donut store which opened a few months prior. There are also a number of chains in the new building, including Firehouse, Beer Station, and others on the second floor.

I was in the area recently and decided to pop in to check out Medellin’s hottest new coffee shop, and was surprised to see an absolutely packed interior and a line that went well out the door.

Luckily there were plenty of baristas on duty and the line moved ahead relatively quickly. This Starbucks serves up the same variety of espressos, coffees, teas and frappuccinos that you are accustomed to seeing, with prices slightly cheaper than the US, at least at the current exchange rate.

You can also find small snacks ranging from muffins, cheese sticks, chocolate cake, and other bakery items in prices that range around 4.000 to 8.000 pesos.

The store features two large outdoor patio areas which sit under cover and provide ample seating. The interior of the Starbucks is not particularly large, though it offers a decent amount of seating, including one large communal table which will serve well for people looking to get a bit of laptop work done. There is free Wi-Fi on the premises, of course, as one would expect in any modern cafe.

The interior also displays some lovely artwork from local artists including a giant colorful mural of Colombia by renowned Colombian artist and illustrator Catalina Estrada. There are also hand painted graphics on the columns from Natalia Penagos which represent the Starbucks Farmers Support Center in Manizales which works directly with farmers to help them grow high quality beans, lower production costs, and increase the yield.

Starbucks is the largest single purchaser of Colombian arabica coffee beans and here in Colombia they serve 100 percent locally sourced and roasted coffee for all of their in-store beverages. Though you can find packages of beans for sale from popular beans from other regions of the world, and you can also find the typical cups and mugs that Starbucks offers for sale.

The expansion of Starbucks here in Colombia is ongoing, with at least 50 stores anticipated to be in operation by 2019. As part of that expansion, another five stores are slated to open here in Medellin before 2018.

Currently you can find Starbucks along the Milla de Oro, and inside the Oviedo and Santafe shopping malls as well.

Starbucks is partnered with Alsea, a Mexican company which owns and operates all of the Starbucks stores in Colombia, Mexico, Chile, and Argentina. The store in Medellin marks Starbucks’ 1,000th store in Latin America. In addition to working with Alsea, Starbucks is working with Grupo Nutresa, a company based here in Antioquia, in order to serve that locally sourced coffee at all of their stores.

Starbucks has had a relationship with Colombian coffee growers for more than four decades. It’s nice to see them operating in one of the countries most strongly linked to coffee, thanks to the fact that many Colombians are starting to take an interest in coffee that goes beyond the instant variety and simply producing it.