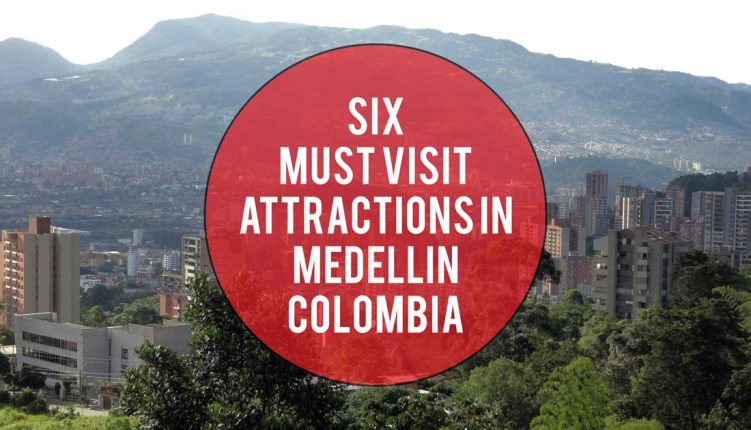 If you’ve only heard about Medellin, Colombia in the news way back when or from the Netflix series, Narcos, then you’re probably familiar with this city for all the wrong reasons. But now that stability and security have taken hold, the country has opened up to a whole new wave of travelers and expats.

I’m one of those people that never in a million years imagined I’d come to live in Medellin – I was just passing through on my way to explore more of South America, but then I got pulled in by this incredible town.

As someone who has lived in Medellin for about two years now, here are my top recommendations to friends and family for the places they absolutely must visit in Medellin:

Fernando Botero is probably the most famous Colombian sculptor and artist. So even if you aren’t familiar with his name, you’ve almost certainly seen his work at some point in your life.

He is known for his particular style of art where everything is painted or sculpted in exaggerated proportions, making them look “fat” or voluptuous.

You can take in a selection of his sculptures for free in Plaza Botero – the crowded and frenetic central square in the city center – and then pop in to visit Museo de Antioquia where you can browse through the large collection of his works, including sculptures and a variety of his paintings.

Speaking of El Centro, most tourists only visit Botero Square and Museum, but there is a lot of interest to see in the surrounding area – and no visit to Medellin is really complete without wandering through the frenetic city center.

You can browse the crowded street stalls along El Hueco, “the hole”, which sells all sorts of things from clothing, shoes, hats, belts, and much more. You will find some of the cheapest prices on goods here in El Hueco. Nearby shops sell anything else you could be looking for, from the household products and kitchen goods, to guitars and electronics.

I’d also recommend wandering up Junnin Street – a popular pedestrian-only shopping area that is so deeply rooted in the city that the word “junniniar” (window shopping) became a local verb.

From Junnin you can venture up to the Metropolitan Cathedral — an impressively large church and supposedly the largest oven-baked brick structure in the world.

There is so much more to see in El Centro, of course, and I highly recommend taking the free, donation-based, Real City Walking Tour for an excellent overall idea of El Centro and a bit of insight into the history and character of Medellin.

See our article for more specific recommendations on things to see and do in El Centro.

Located to the north of the city center (El Centro) you will find the Botanical Gardens adjacent to the University of Antioquia. Here you can stroll through the orchid garden, or wander among the cacti, flowers, or lush forest landscapes.

You can take a picnic lunch to the Botanical Garden for a great (and free) way to escape the hustle and bustle of life in the big city and find your own little quiet place. Just watch out for the large iguanas that roam around trying to steal a bite to eat.

Beyond the iguanas, it’s also a great place to see a variety of animals and wildlife – you’re sure to see tons of ducks and geese in the pond, and maybe even the macaw parrots that make their way through Medellin. I even saw a little monkey there once, incredibly.

While you are in the area, you should also make time to visit the interactive science museum known as Parque Explora and stop by the spectacular Planetario de Medellin.

Medellin features the only metro system in Colombia — a point of major pride here — but arguably, their greatest idea was to incorporate the metro cable system (aerial trams or gondolas) with the public transport network and connect the city’s poorer slums to the city-at-large.

In doing so, Medellin dramatically improved the economic prospects for thousands of residents in poor neighborhoods, and greatly reduced the time it takes those citizens to get to jobs or potential employers in the valley below, which in turn reduced crime in what used to be some of the most violent parts in the city.

This investment in poorer communities is not only the primary means of transport to the residents nearby, but it also unintentionally became a major tourist attraction, since the hillside communities offer some of the best views of the city.

From Santo Domingo station (the last metro cable station), you can also take another, separate gondola line – not included in the cost of regular fare – up to Parque Arvi, a nature park and reserve located just above the city where you can enjoy cooler temperatures, hiking trails, forests, and streams. It’s a great place to go explore on a hot day and reconnect with quiet and serene nature area.

On the other side of the Rio Medellin and just outside the neighborhood of Laureles, you’ll find a small but prominent hill that rises out of the valley floor. The hill is known as Cerro Nutibara and at the top you’ll find a little fake Colombian pueblo (town) known as Pueblito Paisa.

The little pueblito itself is pretty cool — it’s got the traditional church and town square lined with shops where you can purchase all manner of local souvenirs — from silly little signs in Spanish, to bottles of aguardiente, or various knick-knacks in the red, yellow, and blue colors of Colombia.

The real draw of Pueblito Paisa though, in my opinion, is the great 360-degree view of the city, looking out from the heart of the city. From here you can take in the twinkling lights of the hillside communities, the sparkling towers of Poblado, and the big skyscrapers that lie at the heart of downtown.

I’d recommend you time your visit just before sunset, arriving at 5:30 or 6pm, so you can see the view during daylight, catch the changing colors of sunset, and then take in the view as night takes hold and the city lights shine. It’s a great place!

Poblado and the Malls

Most foreigners stay in Poblado, the most upscale, developed and westernized part of the city. Regardless of whether you stay there or elsewhere, it is certainly a place worth checking out – just don’t be the tourist who never ventures out of Poblado.

Poblado is the center of nightlife and weekend activity, and it is also home to a growing number of incredible restaurants, including a burgeoning international cuisine and some of the best cafes in Medellin.

While shopping malls have kind of lost their popularity in the United States, the malls here in Medellin are more popular than ever — and are something to be seen to be believed, for sure.

El Tesoro is a huge complex overlooking Medellin, which has hundreds of amazing stores, upscale shopping, and dining, and also features a little theme park at the center with a variety of kids amusement park rides. Just as large and impressive is the Santafe Mall, which actually has a retractable roof like a stadium in order to accommodate the day’s weather.

Read our article about the 7 Malls You Can’t Miss in Medellin.

Shopping centers are the main places to see and be seen in Medellin. Take a stroll, grab a bite to eat, do a little window shopping, and maybe even grab a movie at a top-of-the-line cinema at the mall.

Part of the beauty of Medellin to me is that it is a city of contrasts – one day you can barter over a t-shirt in the “hole” in El Centro, and the next day you can be strolling through some of the most upscale shopping centers you’ve ever been to. Or you can do both in the same day, quite easily.

So there you have it – a few of my top sights to see and experience during your trip to Medellin.

Medellin is an amazing city, and there truly are about a million things to do in Medellin, but the best way is to discover it for yourself… I invite you to come experience what lured me into settling unexpectedly in the City of Eternal Spring.