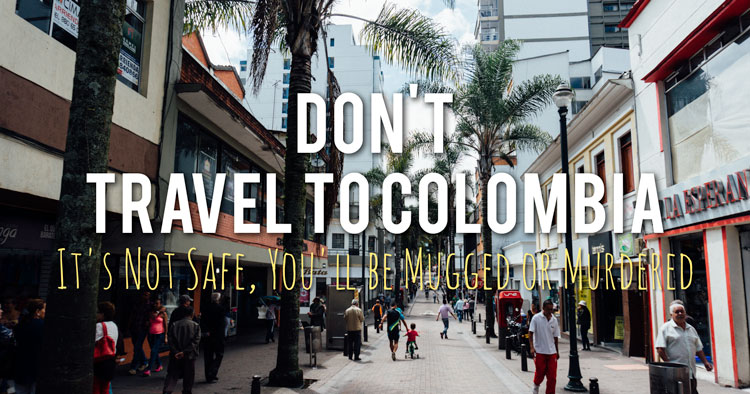 When I told friends and family that I was going to travel around Colombia, I’d watch as their eyes lit up with shock and they would say “What are you crazy? Isn’t that dangerous?”

In the 80s and 90s, Colombia became synonymous with cocaine, violence, and kidnapping — a place of insecurity and upheaval.

Medellin, more than any other city in Colombia, harbors the worst reputation from the days of Pablo Escobar, where it once had a homicide rate of more than 381 people per 100,000 residents, which is a rate double the worlds most violent city today.

While the image of Colombia as a dangerous, violent country may have been more accurate in the 90s, much has changed in Medellin and Colombia on the whole since the death of Pablo Escobar more than 20 years ago.

For the past few years, Colombia has been enjoying a surge of tourism as the world comes to explore this previously forbidden country.

Statistically, the violence and danger here in Colombia has subsided dramatically from its heyday in the 90s, but statistics don’t really tell the whole story about how one feels in regards to personal safety and security while living your day-to-day life.

When I read the State Department travel warnings about Colombia, it sounds like a pretty terrible place and I ask myself if that’s really the country where I’m living. They talk about getting drugged with scopolamine, getting taken for a “paseo millanario”, how kidnapping is still common, and how you shouldn’t hail taxis from the streets.

The over the top warnings from the U.S. Government don’t really seem to match up with the reality that I’ve experienced here. I’ve now spent more than two years living in Medellin, Colombia, and I’ve traveled from one side to the other, from the coast to the mountains, from El Cocuy to Mocoa.

For foreign tourists I would say that yes, Colombia is safe. It’s as safe as any virtually any other country in Latin America. During my day-to-day life here I feel nearly as safe as I am back home in any big city.

My mom has even come down to visit twice now, which I certainly wouldn’t advocate if this country was overly dangerous.

Safety and security is a tricky subject because if I say that it’s safe, some would argue I’m painting an overly rosy picture, and if I talk about insecurity, some will be quick to point out that there’s insecurity everywhere from the USA to Europe.

But I’d like to try and portray a balanced, realistic picture of security from the perspective of a foreigner living in Colombia.

Most of the violence that still plagues the country is related to the drug trade, so if you’re not involved with that world, you don’t really have to worry about being gunned down.

For foreigners (and Colombians, as well) the number one concern in regards to safety and security has to do with thefts and robberies.

Robberies by armed assailants are far too common, and most foreigners who have spent a long time here have either been victims or know a close friend or two that has.

Now, for those quick to criticize, of course robberies happen in the USA and anywhere else. But realistically you are more likely to fall victim to it in Colombia than back home. It can happen almost anywhere.

It Can Happen Anywhere

You can be robbed as you sit in a taxi waiting at a stop light.

You can be robbed returning home one night.

You can be robbed in broad daylight with people around, at the corner of a busy intersection.

But after two years living in Medellin, I’ve yet to experience crime in this city. Actually, the only time I’ve ever been stolen from was when I got mugged just blocks from the U.S. Capital Building while living in Washington, D.C.

To some degree, robberies just come down to bad luck and being in the wrong place at the wrong time. But if you’re traveling or living in Medellin or other big cities in Colombia, you should always take a few basic precautions in order to reduce the likelihood of becoming a victim yourself.

Colombians have the saying No Dar Papaya which means “don’t give papaya” because if you do, someone will take it from you. The papaya in this case is anything of value, even silly things that you probably wouldn’t think would be worth stealing.

This saying places the blame a bit on the victim, but basically just means don’t offer yourself up as the easy target.

If you want to make ostentatious displays of wealth to attract attention, well you might also find yourself attracting the wrong sort of attention. Don’t flash big wads of cash on the street. Don’t wear expensive watches or fancy jewelry. Don’t wave your expensive smartphone around on the street.

If you’re coming to Colombia for the drugs and prostitutes and other things that are probably illegal in your home country, then you’re just asking for trouble.

Don’t Use ATMs on the Street

You can find ATMs at virtually any big box store where you can withdraw cash and not be so exposed to wandering eyes on the street.

Be Wary of Motorcycles

The majority of robberies occur by thieves on motorcycle who will pull up as you sit in a taxi or walk down the street, threaten you by showing a weapon and then making a quick getaway in the gridlocked traffic.

There’s not much you can do once they’re there, but try and be aware of your surroundings for suspicious activity by motorcyclists that often work in pairs.

An acquaintance of mine had an experience where him and another foreigner met a friendly Colombian couple, they passed more than two hours hanging out, chatting, and sharing a drink. The couple invited them to go to another place by taxi and then they robbed them of their belongings.

Yes, anecdotal stories are the worst, but friendly Colombians will also tell you not to trust strangers, even though they can be some of the most enriching and memorable experiences you’ll have while traveling.

This advice is tough to give because 99% of the Colombians you meet are kind, friendly, and honest — that has been my experience 100%. But there is always the chance that someone could be leading you on with bad intentions.

But should bad luck come your way and you find yourself the victim of an armed robbery, please remember to stay calm and do not resist.

Nearly every story of a foreigner being killed in Colombia is due to them resisting the robbery or fighting back, and there have been more than a few of those stories, unfortunately.

On the whole, I think Colombia is quite safe if you take some common sense precautions during your day-to-day life. Mostly it just comes down to not inadvertently exposing yourself as an easy target.

What do you think about safety and security in Colombia? Have you fallen victim to theft or robbery? What advice would you pass along to new visitors?