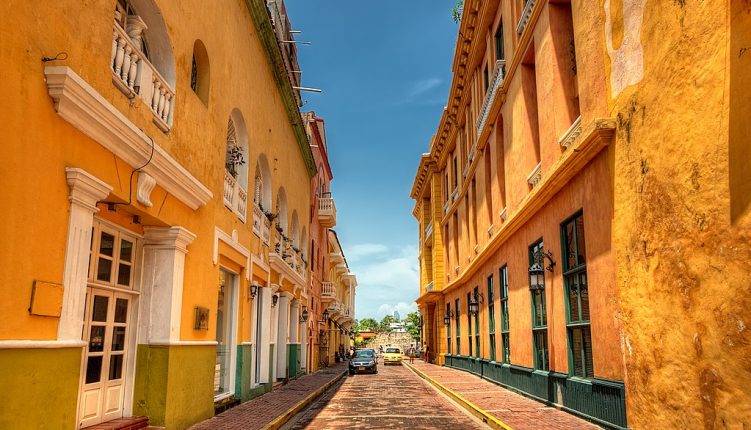 There is no place in the world that is totally safe, so you can’t expect complete safety in Cartagena, a large and bustling city in a developing country with a deep chasm between the haves and the have-nots…

But that doesn’t mean that Cartagena is particularly dangerous either. Of my numerous trips to the beautiful colonial city of Cartagena, there wasn’t a single time where I felt I was in danger, but I was always sure to take common sense precautions.

You have to remember that the golden center of Cartagena where you find all of those trendy neighborhoods, colorful streets, and glittering towers across the way is not the only part of the city.

This is a city with deep divisions caused by economic inequality, where gangs fight for the control of strategic areas, whether for drug related issues or smuggling routes.
In the touristy parts of the city, there is little chance of you coming face-to-face with drug-related or gang violence, but away from those areas, the reality is different and you have to be aware of that.

Sometimes safety in a developing country has a little to do with luck as well. A random guy with a gun can always appear out of nowhere, but the violence in a town like Cartagena is usually far removed from the tourist trail.

Too much violence can scare off visitors, and without people there is no business, so there is a general level of safety here that you can take for granted, but the real danger in Cartagena for the tourist stems from the continuous flow of tourist scams or other attempts to rip you off.

While there aren’t any new tips for the experienced traveler, I want to give a few pieces of advice to the novice traveler to Colombia.

How to Manage your Money

Cash is king here. Not only are cards not widely accepted, but you also avoid having to hand your Visa over and let some stranger charge you (and possibly skim the numbers). On the downside, cash can be easily stolen. In my experience, the best way to handle your money is by visiting the ATM once a day for the money that I need for that day.

Get to Know the Local Currency

There are plenty of videos on YouTube about how to identify if the change that they give you in a restaurant or a cab is real. Colombia has one of the safest currencies in the world, but none of that security matters if you simply don’t check the bill you’re given back as change.

It’s a common trick to either hand back incorrect change, forged currency, or for the taxi driver (or whoever) to quickly swap your legitimate bill for a fake one and claim you handed him forged currency.

There is a problem throughout Cartagena with price gouging for tourists, but just by going to places that list prices on the menu (keep one of the menus on the table to check that the prices in the menu match with the ones of the bill) and tracking what you eat and drink, is enough to avoid this problem.

Watch Where you Eat or Drink

Be careful eating just anywhere on the street, as some locals are happy giving you food or “a taste”, then they and you the bill with exorbitant prices.

Along the beach it is even worse. Sometimes a guy will come to you, acting as if he was a waiter, and he brings you the food, the drinks, everything. But then, when you are going to pay, he overcharges you for the food or adds in a surcharge for the chairs or umbrella on the beach.

As a solution you may think to just call the police, but if you do, and wait for all the procedures, you will just find out that the guy (supposedly) doesn’t even work there, he was just attending you and the restaurant let him.

The same thing can happen with massages on the beach, and other services, but just say no, even if it means you have to be rude. On a positive note, the police are working hard to end those kinds of scams on the beaches.

Be Careful while Partying

There are plenty of street parties that form out of nowhere in Getsemany or the Old Walled City, and they are great — the street food is awesome, the liquor… all of it. But don’t accept drinks from strangers unless the containers are sealed, don’t walk along dark and lonely streets, don’t walk alone, and be sure to let someone know where you are and what you will be doing. The same rules can apply in bars and anywhere else.

I don’t mean to badmouth Cartagena and its friendly people. It is a beautiful and wonderful city, with a ton of things to see and do. It’s a a city trying to overcome a number of hardships with the effort of a great many people, but there will always be someone with a more selfish approach by taking advantage of tourists in order to get by in their times of need.

The idea of this article about safety in Cartagena is to reduce the probability of a bad experience and putting a stain on an otherwise wonderful experience that you are going to have in the city thanks to a few bad apples.

What has been your experience with safety in Cartagena? Any words of wisdom for fellow travelers?