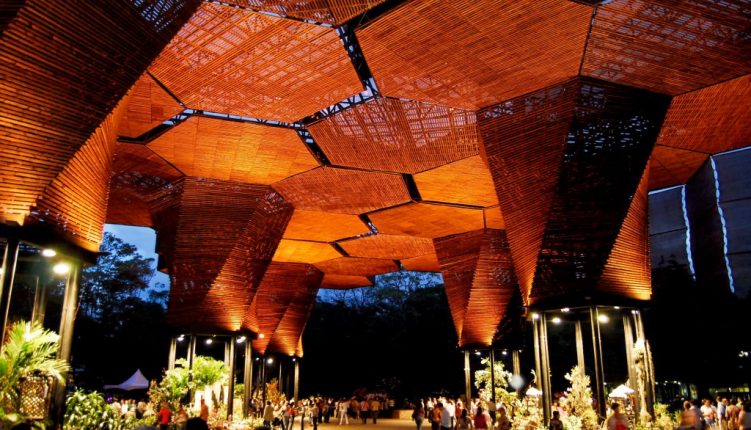 How to Have Tons of Fun without Breaking Your Budget

Some of the best things about Medellín are found in their parks and plazas. Aside from being excellent ways to spend a day, they’re free popular social gathering points, which seem to always have perfect weather (except maybe when it’s raining)! At the larger parks, you’ll often be able to enjoy regular events such as concerts and local vendor’s markets.

In the evenings, and especially toward the weekends, you’ll discover young people hanging out and drinking beers or shots of aguardiente purchased in the nearby tiendas. Why not enjoy the natural scenery rather than partying in the discotecas? There is so much to do, and here are our favorite fifteen places to do it!

Also: be sure to read this list to find out where the most famous artist of Colombia donated statues, and also where you should be on the lookout for pick-pockets!

(Carrera 64B and Calle 50 – Suramericana metro)
You’ll find this park on the western side of the city, near the soccer stadium. It’s known as a favorite amongst middle-to-upper-class locals, so it might feel a little of the beaten track if you’re a tourist.

(Calle 30A #55-64 – Industriales metro)
Cerro Nutibarra is one of two hills located on the valley floor. You can get to the top by foot, or, without getting sweaty, by taxi. Either way, when you arrive at the top you’ll have breathtaking 360-degree views of Medellín and the surrounding mountains.

While you’re there, be sure to check out the hill known as Pueblito Paisa, which is actually a mock Antioquian pueblo, featuring a restaurant serving typical Colombian food.

(Botanical Gardens – Universidad metro)
If you’d like to get away from all the noise and commotion, Jardín Botánico, which are the city’s botanical gardens, is the perfect place for you. You can get here easily from the Universidad metro station. And it’s also a place where they often host concerts and other outdoor events on the weekends.

(Santo Domingo metrocable)
Are you feeling adventurous? Parque Arvi is a 70-square-kilometer nature reserve situated beyond the valley. That’s right, it’s really not a part of Medellin, and yet, it’s still easily accessible via a metrocable that runs from Santo Domingo over the eastern mountains. Allow yourself a full day for this one, as it takes time to get to and from the park.

(Carrera 44 and Calle 20 – Poblado or Industriales metro)
If you’re facing the front entrance of the Museum of Modern Art in Medellin, walk down the left side of the building and you’ll see a small concrete plaza that hosts frequent concerts and outdoor events. Further back, running behind all the new apartment buildings, is a long green space.

On the weekends here, the park in Ciudad del Río fills up with local residents doing everything from picnicking to bringing their dogs out for a walk. We like to watch skateboarders defy gravity in the concrete skate bowl next door, which also makes for terrific photo opportunities.

(Calle 51 and Bolívar Parque Berrio metro)
If you look across Botero Plaza (on the other side of the metro station) you’ll find Parque Berrio. Usually crowded with plenty of people, this park is worth a walk-through after visiting Botero’s sculptures, just for the people-watching.

While you’re there, snag yourself a fresh cup of juice or tinto (coffee) from one of the vendors, and listen for the musicians and singers who often perform in this fantastic park. You’ll want to be wary of pickpockets, so keep a firm grip on your belongings while here.

(Carrera 43 and Calle 37S Envigado metro)
As you’ll quickly see, Parque Envigado is the center of daily life in Medellín’s neighboring city to the south. And you’ll see just  how large it is, when you realize it takes up a full square block.

In the daytime, old men sit and chat, while the evenings, find a younger demographic filling the spaces. At the end of every year, in December, Parque Envigado and the surrounding streets are blanketed with Christmas lights. The effect is mesmerizing, and quite worth the trip by itself.

(Carrera 52 and Calle 73 – Universidad metro)
Across the street from Jardín Botánico is Parque Explora, which ofers interactive displays to help kids learn about science and physics. Having visited on my frst day in Medellín, I can assure you it’s fun for adults too!

Adjacent to this park you’ll find South America’s largest freshwater aquarium. Don’t let that distinction get you too excited, there aren’t a lot of aquariums in South America, as the size of this one will quickly clue you in!

(Park of Wishes – Carrera 52 and Calle 73 – Universidad metro)
Standing  opposite the Universidad metro station, if you’re coming from Parque Explora you will see the park, which is best known for the Medellín Planetarium, which saw major renovations back in 2012.

(Barefoot Park – Carrera 57A and Calle 42 – Alpujarra metro)
Would you like to give your feet a natural foot massage? Here at Parque de los Pies Descalzos, which occupies the space between (Medellin’s version of a CIA) the town’s Intelligence building and the Plaza Mayor conference center.

Visitors remove their shoes for what truly is an enjoyable natural foot massage experience as you walk across areas of sand, bamboo, and water.

(Carrera 40 and Calle 9A – Poblado metro)
Oh the famous Parque Lleras, the fabled center of Medellín’s Zona Rosa, known internationally as Medellin’s hub for all things nightlife. This park offers a small tree-filled area surrounded by dozens of restaurants, bars, and discotecas. Realistically, you’ll probably only use this as a meeting place before heading out for  food or drinks.

Why not stay in walking distance from everything beautiful around Parque Lleras?

A motley crew of paisas, ranging from bohemians and punks to college kids and drug dealers, hang out here. Police can be seen patrolling the area, but don’t look for them to step in and curb the dealing and marijuana use.

It’s something of a free zone. There are a few dive bars facing the park, and the famous El Eslabón Prendido (for salsa) is a halfblock away. The vibe is certainly unique; however, having visited at night with friends on more than one occasion, I can’t say I ever felt comfortable hanging out there.

If you decide to visit, go with a friend, preferably a Colombian one, and be careful.

(Calle 10 and Avenida Poblado – Poblado metro)
Sitting halfway between the metro station and Parque Lleras, this park is full of trees, spread out over one square block. You might check it out when the weather’s nice, since it’s a popular drinking spot for college kids, especially on the weekends.

When he donated some of his larger-than-life bronze statues to the city, they were nice enough to put them on display in Plaza Botero. While some argue that Medellín is short on traditional sightseeing activities, you’re sure to enjoy these visual delights.

(Park of Lights – Calle 52 – Cisneros metro)
Imagine a concrete plaza with 300 vertical columns, each a length of 79 feet (24 meters) tall. It’s interesting enough to walk around by day, but the true spectacle is at night, when the columns are lit up. Biblioteca EPM, a library, facing this plaza, offers you an exit from the hustle and bustle of Centro, with great coffee as a bonus (on the second-floor café).

That’s it! If you had time to get to all these parks, perhaps you’ve already moved here? One thing we absolutely love about Medellin is the endless stream of activities and possibilities this city delivers–there’s always something new and fun to do!

What’s your favorite park or public space in the city? Let us know in the comments below.