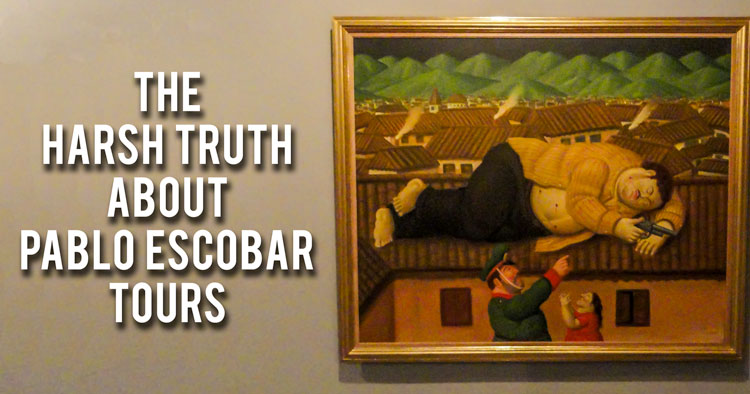 Pablo Escobar tours and tourism has been growing in popularity over the past few years. There are now at least a dozen tour operators who will take you around Medellin, Colombia and show you the places where he lived, died, or was buried.

When you ask anyone outside of Colombia what they associate with the country it is inevitably cocaine and Pablo. They are Colombia’s most famous legacy to the world.

Most Colombians recognize that this is true and unavoidable, but they also hate it. They would much rather their beloved country be known for the coffee, the friendly people, the beautiful women, for Gabriel Garcia Marquez or Fernando Botero. Anything but the infamous drug and its former kingpin.

Yet every day dozens of foreigners from all of the world come to Medellin and go on a tour across town to get to know Colombia’s most infamous figure.

Many Colombians are worried that this type of tourism will whitewash and mythologize the man who brought a country to its knees and destroyed its reputation.

I have spoken with many Colombians about Pablo Escobar over the years, and among those who utterly despise Pablo the most common question to me is “Why would Americans idolize Pablo?”

What could possible possess an American to come to Medellin and put flowers on the grave of Pablo Escobar?

There is a long history of Americans mythologizing certain bad guys — mostly those associated with organized crime.

During the prohibition era, many Americans were opposed to outlawing alcohol and saw figures like Al Capone, Lucky Luciano, and Meyer Lansky as heroes.

Their mythology only grew with time and distance. They were renegades who thumbed their nose at authority and made a fortune in the process (and we always put the wealthy on a pedestal).

Hollywood films like the Godfather trilogy and every other gangster movie has made us root for the bad guys.

But America doesn’t celebrate all bad guys, for instance, no one is mythologizing Charles Manson or the Columbine shooters. Serial killers are the subject of countless Hollywood films, but they aren’t celebrated as heroes, they’re the ones to be feared.

Many Americans are able to mythologize the mob, because of their distance to it. The mob’s supposed moral code meant that if you weren’t involved with organized crime, then you had nothing to fear. As opposed to a maniacal serial killer who could target you, your friends or your family. This is known as psychological distance.

The rags to riches story is also as American as apple pie.

Thus Pablo Escobar is a perfect fit for mythologizing in America — he posed no threat to any of the Americans patronizing today’s tours and he rose from nothing to become one of the richest, most powerful men in the world.

And his story is undeniably interesting, he had a certain evil genius that is terrifying and fascinating all at once, which makes for compelling storytelling — evidenced by the countless books, films, and movies.

But we must remember that Pablo was no common gangster like Al Capone, he had no moral code guiding him like the Godfather. Pablo was undeniably a monster, responsible for the deaths of thousands, who terrorized a country, who could bomb innocent civilians or blow up airlines to suit his ruthless goals.

Medellin was the most violent city on earth, with a homicide rate double today’s most violent city. Many Colombians worried about whether their loved ones would return at the end of the day.

To be clear, it’s not just Hollywood or Americans cashing in or celebrating the image of Pablo.

There are Colombian telenovelas about the man, you’ve got locals selling “El Patron” t-shirts with his face emblazoned on the front, you’ve got tour operators who cater to the foreign tourists, and you’ve even got his son selling expensive jeans bearing the name.

Among Colombians, there are two main camps of thought when it comes to Pablo Escobar: there are those who see him as the darkest, most terrible figure in Colombian history and those who mythologize and idolize him as the Paisa Robin Hood.

Those divisions are seen clearly between the city’s poorest and most uneducated citizens versus those better off economically and with more education.

The city’s poorest residents were the biggest beneficiary of the Paisa Robin Hood narrative where Pablo used his unimaginable wealth to build homes, soccer fields, and so forth. That legacy persists to this day. These people either then ignore or choose to forget the terrible things that Pablo also did.

Those in poverty also tend to see Pablo’s story as one of inspiration, where the drug trade might be the only way to get out of poverty — the same phenomenon that occurs in many poor parts of America’s inner cities, where rap and hip-hop celebrates the drug dealer as the one who managed to escape.

While those of a slightly better socioeconomic background (I do mean slightly) tend to hold Pablo in absolute disdain – a ruthless, evil figure who killed scores of innocent people all in the name of personal greed, wealth, and power.

There is also a division emerging between generations, where some younger Colombians who do not remember or were born after Pablo’s death, have taken to the mythologized image of Pablo as well. While older Colombians can still remember the bombs and blood and fear of that time — and they want to put it fully behind them.

So, as a foreigner in Colombia, should you patronize the Pablo Escobar tours?

Ultimately, that’s up to you to decide.

Pablo Escobar was a defining figure in the history of Colombia… Ultimately, his story cannot and should not be ignored or whitewashed by Colombians.

I think it’s important for all of us to learn about that history and learn about how it shaped not only Colombia but the world.

If, for you, that means going on a tour, then go on the tour. But you could also visit the same sites on your own, and you could talk to regular people on the street who lived through those violent times, without putting money in the hands of those who profit from his name.

And remember, there is a distinct difference between going on a tour to learn the history of Pablo Escobar and Colombia versus going to get a selfie taken with his brother who was an accomplice to his crimes or leaving flowers on Pablo’s grave.

Whether you are Colombian or an American tourist, we cannot ignore the dark history of Pablo Escobar, but we also can’t afford to let it get whitewashed, mythologized, and celebrated.

While some tourists may be drawn to Colombia by the thrill associated with Pablo Escobar and the drug trade, I think the majority will leave Colombia with more important memories of the kind local people, the incredible coffee, and the beautiful landscapes.

What do you think about tourism surrounding Pablo? Sound off in the comments below.