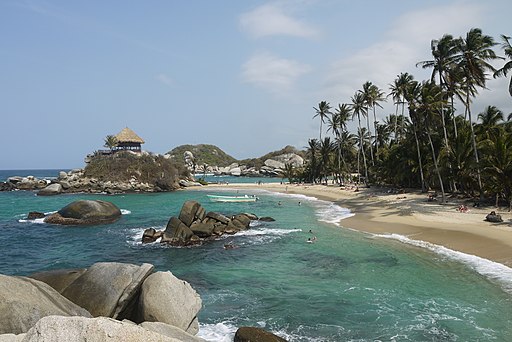 Colombia is spoiled with some incredible wild spaces and a great variety of different landscapes ranging from humid jungles, snowy mountains, and wild beaches. The best part for nature lovers is that many of these beautiful, one-of-a-kind areas are protected as national parks.

If you’re visiting Colombia and are a nature lover, you should be sure not to miss a few of the top parks — in this article we will be sharing five of the best national parks in Colombia that will show you the breadth and depth of the beauty in this wonderful country.

The Via Isla de Salamanca Park is located on the Caribbean coast along a lengthy stretch of land running between Barranquilla and Cienaga.

The area has abundant flora and fauna, due to the confluence of the fresh waters of the Magdalena River (Colombia’s most important waterway) and the sea, and is full of wetlands and mangroves.

El Cocuy National Park is located in the center-east of the country, on the border between the departments of Boyacá and Arauca, where the mighty Andes Mountains rise up dramatically.

The area is popular for trekking, hiking, rock climbing, and mountain climbing.

Although the park is located in a remote part of the country, it’s absolutely worth the visit — it’s one of the most spectacular natural landscapes I’ve visited in Colombia — or anywhere else for that matter.

Los Nevados National Park is located in the Cordillera Central, just beyond the fabled Eje Cafetero (Coffee Axis) and the cities of Manizales, Pereira, and Armenia.

The park is much more accessible for exploring the paramo, or visiting the snow, thanks to its central location and the well-transited cities that sit at its base.

Here you can visit a glacier (although they are receding fast) along the flanks of Santa Isabel, or lay eyes on the mighty Nevado del Ruiz.

When entering the park, you can see the black lagoon, or visit one of the many thermal hot springs.

Trips can be easily organized from Manizales.

Gorgona Island is an island of volcanic origin located 22 miles west of the Colombian Pacific coast (located southwest of Buenaventura).

The island is small, only about a mile and a half wide by less than six miles long, but it harbors a large number of endemic species and unique ecosystems.

The island actually served as a penal colony, housing some of Colombia’s most violent criminals, and became known as Colombia’s Alcatraz — where venomous snakes on the island and sharks in the water would dissuade any escapes. Although one criminal did manage to escape.

The jail was eventually closed and the island was converted into a national park, leaving the former jail buildings to be retaken by the jungle.

Tayrona is one of Colombia’s most important and most popular national parks, thanks to its location along the touristy coast, just 22 miles from the city of Santa Marta.

The 58-square mile park protects a number of wild jungle beaches, making it a popular place for hiking, camping, or staying in rustic lodging.

The park is the second most visited in Colombia (second only to Rosario and San Bernardo Corals which is an underwater park off the coast of Cartagena) and sees a steady flow of travelers making their way east from Cartagena along Colombia’s beautiful coast.

The area protects more than 100 species of mammals and 300 species of birds, ranging from oncilla, military macaws, and tamarins.

These five parks are but a small sample of the 59 protected areas across the country, covering some 55,000 square miles (more than 11% of the country’s area).

You could spend a lifetime exploring them all, but these five should give you a good start. If you’re looking for even more to check out, I’d take a look at Purace, Serrania de la Macarena, Chingaza, or Los Estoraques for a few more good options.

What national parks have you explored in Colombia? Which one was your favorite? Sound off in the comments below.