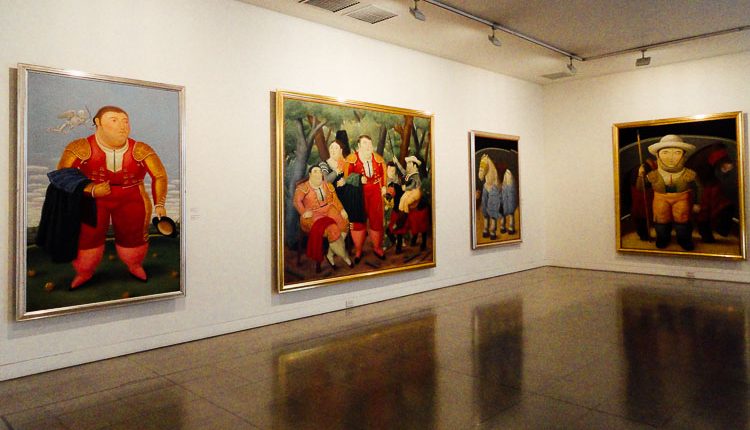 No visit to Medellin would be complete without a exploring the Museum of Antioquia and Plaza Botero — where you will find the artistic works of Fernando Botero — Medellin’s most famous artist, who is internationally renowned.

Even if you don’t know the name of Fernando Botero, you’ve probably seen his work at some point or another in your life.

Botero’s signature style is painting or sculpting all of his subjects — people, animals, even still life scenes — with exaggerated, “fat” forms.

However, Botero did not consider his subjects fat but rather considered his work to be an exploration of proportion, size, and shape — not unlike Monet exploring light by his hundreds of paintings of water lilies.

His work has been featured in all over the world, and he is probably the most famous Colombian artist, eclipsed perhaps only by Gabriel Garcia Marquez.

Fernando Botero was born in Medellin in 1932. Botero went to school to become a bullfighter (which features prominently in much of his artwork), but decided to pursue the arts, as he went on to live abroad in Madrid, Paris, and Florence where he was able to study the works of famous European artists.

Upon arrival at the Botero Square, be sure to take a moment to wander among the 23 Botero bronze statues scattered around the large open plaza, and take in the hustle and bustle.

Visually, the most striking aspect of the square is the large and beautiful Rafael Uribe Palace of Culture, built in a traditional Gothic style.

If you want to get the most out of your visit to the museum, I would recommend you rent the handheld audio guide, which tells you the story behind some of the individuals working throughout the building, which is available in English, as well.

The main draw of the museum is a comprehensive collection of paintings and sculptures of Fernando Botero, located on the third floor, which houses nearly 100 works by Botero.

The third floor also features a hall of art from various international artists, primarily of the modern art style.

I would recommend that you start your visit on the third floor — which is the main attraction — and then work your way down to the lower floors.

History of the Museum

The Museo de Antioquia itself really took off when they tried to buy one of Botero’s works by paying in installments, an unusual request, certainly. Botero responded by donating the work to his hometown museum.

Botero then became a regular patron of his hometown museum with continual donations, including a number of bulk donations, which provided the need (and justification) for the museum’s expansion to a new home in 2000 (where it currently resides).

The Museo de Antioquia is a must visit cultural attraction here in Medellin, and will introduce you to an artistic side of this town that is often overlooked, while also providing a bit of insight into the lifestyle and history of Medellin and Colombia in previous generations.

The Museo de Antioquia is located in the lively El Centro, right next to Plaza Botero, and just steps from the Parque Berrio Metro Station, making it easily accessible from any place in the city.

I would recommend budgeting at least three hours to adequately explore the museum’s numerous halls and artwork, though you could easily spend more time as well.

Within the museum you’ll also find a really nice little gift shop (perfect for buying presents for people back home) with lots of unique hand crafted goods, typical of Colombia.

Outside along the terrace you’ll also find a nice cafe where you can sit back with a coffee or juice and take in the vibrant Plaza Botero.

The Museo de Antioquia is by no means the only cool attraction in El Centro, so be sure to check out our overview of things to see and do in Medellin’s El Centro. It would be easy to make a whole day out of exploring this part of town.