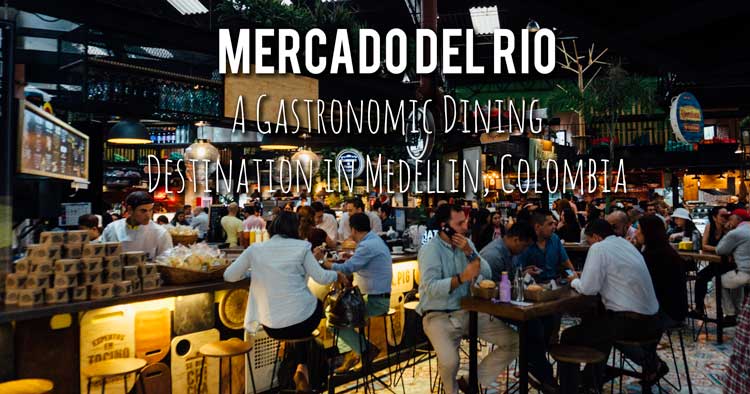 Just along the northern edge of Ciudad del Rio you will find what is among the coolest dining destinations in all of Medellin, tucked into an old warehouse beside Avenida Las Vegas.

My biggest critique of Ciudad del Rio — the mix of apartments, medical clinics, the Museum of Modern Art, and a smattering of local businesses just north of Poblado — was that there were relatively very few options when going out to eat, without heading to Poblado or another neighborhood. But that all changed pretty much overnight with the opening of Mercado del Rio.

I had driven past the Mercado del Rio a few times and kept telling myself “I should go check that place out,” without really knowing what it was or what to expect. When I finally walked through those doors, it was so far beyond anything I’d expected to see in Medellin.

The old warehouse — which used to store the Christmas decorations — has been completely revamped and modernized, housing nearly 50 different restaurants with almost every type of cuisine imaginable, from Italian, Mexican, Peruvian, sushi, healthy fare, crepes, sandwiches, and so much more.

I was blown away by the sheer breadth of variety housed under one roof, and it made it really tough to pick a place to grab lunch. We had to do at least two laps through the first floor — where the bulk of the kiosk-style restaurants are located — and one lap through the second floor — which houses a few sit down, traditional, restaurants — before we could even decide on what to eat.

So Many Places to Eat

I would guess that not quite half of the 50 restaurants are recognizable names throughout other parts of the city, places like Parmessano, Jabali, Montaditos, Al Alma Cafe, and so forth, whereas the majority were places that were new or unfamiliar to me.

The simplest analogy I can make is that it is like a fancy mall food court, but more upscale in nature, with a greater variety of options, higher quality of food, along with a cool and trendy vibe, so not really like a mall food court, at all.

Thanks to the sheer variety of restaurants available, I imagine the place would be excellent to go with a small group, where everyone could grab something that suits their tastes and then converge back at the same table to socialize. Indeed, Mercado del Rio looks to be extremely popular with the local lunch crowd that works in the nearby Bancolombia building or the offices of Ciudad del Rio.

We eventually settled on a place called Mr. Pig, which specializes in chicharron hamburgers or hotdogs for something entirely new and different, where they replace the normal meat with delectable chunks of smoked chicharron, served with a side of fries, and with a variety of different dipping sauces to choose from. The chicharron burger was delicious and absolutely unique from anything else I’d eaten in Colombia, and cost around 25.000 pesos.

It is safe to say that there is no place like Mercado del Rio in Medellin, or even Colombia as a whole. The space was modeled on famous culinary markets in other global cities like the Chelsea Market in New York, the Borought Market in London, or the Mercado Roma in Mexico City, where the designers tried to take the best elements of each and incorporate them into their new gastronomic dining destination in Medellin.

I’ve only been to the Chelsea Market in New York, but I’d have to say that the Mercado del Rio is far more impressive, and is a place I can see myself returning again and again, particularly whenever I have out of town guests.

The Mercado del Rio is not just restaurants, you will also find wine bars, a beer garden, a plethora of dessert options from churros to giant cookies, to coffee shops, to nice sit-down restaurants.

Prices vary depending on the place, but most are in the midscale range where you can expect to pay around 25.000 per entree or so, though some places feature a fixed “menu of the day” offering at a slightly more economical rate.

All-in-all, I would say that the Mercado del Rio is absolutely a destination dining experience, that everyone should check out at some point while they are in town.

The closest metro station is Industriales, which is a short walk just to the north, or by public transportation along Avenida Las Vegas.

Mercado del Rio is currently open from 7am – 9pm, but be sure to confirm the hours online before your visit.