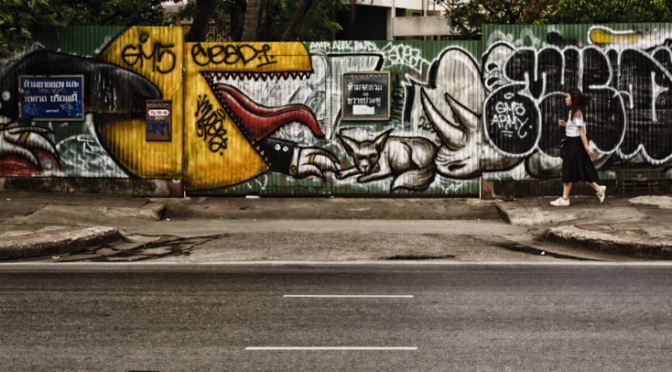 Formerly one of the most dangerous cities in the world, Medellin is keen to renew its image.

And while many consider urban graffiti art synonymous with crime, urban degeneration and disorder – in this city it’s anything but. It’s a symbol of positive change.

As far as Medellin and its residents are concerned, more graffiti is good graffiti. Here, the aerosol art form signals citywide invigoration, a reclamation of the Paisa values buried beneath years of the gangster culture Pablo Escobar unleashed upon the populace. The vibrant colors signal optimism for a bright future.

When we talk about graffiti, we’re not talking about tagging. Those seemingly offhand signatures that crisscross postal boxes and city walls don’t qualify as art.

We’re talking about murals: wall-sized, well-organized, pre-planned, fully appreciated works done by a practiced hand. Lovingly shared within the public space, these edified canvases share the beauty, the ideas and the collective will to improve the community. Such are the outward expressions of lamentable histories and latent aspirations and of shared cultural values in a phase of growth. The graffiti embodies a sense of community, acting as both storyboard and springboard for the modern life and its citizenry.

While you’re here, these murals are certainly sights worth seeing. We’re about to give you the rundown on where to see the city’s most significant social art – and what it means to those who live here.

When we consider graffiti art within a larger context, it becomes more accessible, relevant and respected – a viable form of expression. Even “high art” appreciators are brought to know and respect the irreverent, subversive graffiti of the mysterious Banksy. His wall murals have been cut whole from the sides of buildings and these exterior pieces now sell for tens of millions of dollars. His widely successful documentary, “Exit Through the Gift Shop,” relates much of the cultural dissonance around the art form.

Street art doesn’t always stay in the street either. Your life has been directly impacted by street art, guaranteed. Shepard Fairey’s iconic depiction of “Hope” is heralded as a major factor in President Barack Obama’s rise to power in 2008. Such examples of these popular art forms have gained remarkable predominance in the larger world as “the people’s” medium.

All for the love of a girl … indeed, the first documented American street artist, called Cornbread, picked up his cans and made his mark to catch the attention of his high-school crush. What was picked up as a medium for humble communication and expression begins with the highest of hopes: validation and recognition as a human being.

Graffiti has become the image of an ideal. It vibrantly speaks of struggle and passion relevant only to Medellin. Like a cresting wave rising from the streets, the government, the people, it’s come to wash over the unpleasant past with images of affirmation. The modern narrative touches the places that need it most.

The best example of this is barrio Comuna 13. Only a couple of decades ago, this barrio was a pivotal center for paramilitary, guerrilla and gang activity. The location is ideal for crime, leading directly to the main thoroughfare that is the San Juan Highway and providing easy transportation of guns, drugs and money. Walking up the avenues, it’s difficult to imagine them occupied by tanks, flooded with police and echoing gunfire. Here’s what you’ll find along this roadway nowadays:

A brief history of Comuna 13

The 80s-90s: The neighborhood was controlled by groups loyal to Pablo Escobar. Following his death in 1993, the area remained a hotly contested by drug cartels seeking to dominate the area.

October 16, 2002: The Colombian military carried out the controversial Operation Orión, a strike to overthrow all rebel groups in Comuna 13. Over 1,000 policemen, soldiers and aircrew in helicopters attacked the area comprised of roughly 100,000 inhabitants. Nine people were killed, three of them children, and hundreds were wounded. The ongoing siege rendered it impossible to seek medical attention for the wounded, so the community took to the streets in solidarity flying white rags. The fighting stopped shortly after.

2002-2011: Residents continued to voice their growing discontent and anger with the violence that occurred in 2002 through art and community events. To this day, some of the street art around the neighborhood depicts the scenes with white flags raised for peace.

2011-Present: Today, the neighborhood is a remarkable case study on the effects of infrastructure and social integration … and how investing in the community can go a long way. A series of electric escalators were installed in the neighbor in 2011, dividing the hillside into six sections and allowing its people to access different points. Now, the barrio is connected to the rest of the city. A journey that once took residents up a 35-minute hike has been transformed into a six-minute trip.

Just ask graffiti and hip hop artist Jeihhco, a former resident and participant in the “Painted for Life” project. As a devotee to the graffiti lifestyle, featured TED Talks personality and an advocate for social change, he’s been instrumental in reshaping his environment using tools at his disposal. He relates how important graffiti has been to transforming the barrio:

He co-founded Casa Kolacho, a local artist school and collective responsible for 90% of the art along the Medellin Graffiti Tour. It was his inspiration that helped paint the pictures we enjoy today.

The Medellin Graffiti Tour takes you throughout Comuna 13, the internationally renowned example of how “innovative” urban regeneration projects can be used to transform and revitalize communities.

As you climb the outdoor electric escalators, you’ll be immersed in the controversial history, the transformation of the area and the importance graffiti plays in the community.

This tour is a total experience in the re-done district. Take the clean and open metro from the central San Antonio station, hop on a bus and then go up, up, up into the hillside neighborhood. The recently installed outdoor electric escalators are a welcome addition to the ad-hoc community on a hill. In comparison to modern linear causeways, the houses are seemingly dropped piecemeal alongside and atop another.

In fact, the infrastructure and overall cleanliness may come as a surprise to those holstering the notion of years gone by. Children run in the streets. The corner bodegas swell with fresh mangos, pineapple, papayas, all diced for takeaway enjoyment.

It seems natural. As if you couldn’t imagine the walls bare, as if the sweeping murals spanning whole houses were a perennial installation. All walls here are meant as a celebration.

The views from along the tour are stunning. Facing the valley from the west, the barrio lays out beneath and stretches into the city, a swath of life in full color. By the end, you’ll even get a chance to grab a spray paint can or two and make your own art piece during the tour.

The tour is conducted in Spanish and will be accompanied by a bilingual guide to help translate it into English. Groups of up to 10 people are accommodated.

The tour is run through the Toucan Cafe Tours company who also offer coffee farm tours, a Medellin walking tour, chocolate tours and tours of various other notable natural and community areas around Medellin.

Ciudad del Rio is an emergent neighborhood straddling the Medellin river and the neighborhood of Poblado. It also plays host to an enormous park that showcases a truly amazing corridor of graffiti murals by different artists. Walking the perimeter walls of the expansive park, it’s possible to enjoy as many as 100 different artworks – some by internationally recognized street art personalities.

The park acts as a backyard to the Medellin Museum of Modern Art, an industrial-contemporary marvel inspired by the barrio-stack housing styles of Comuna 13 itself. The museum is part cultural center, part social scene. Step inside to tour the seminal artworks of Medellin’s favorite Debora Arango and a perplexingly awesome array of structural wood designs that encircle the interior-exterior walkabout of the museum.

The view from atop the museum is a real stunner, especially at night. Numerous events, an international independent cinema house and live music can all be enjoyed during a calendar month. Sit outside on the patio cafe to survey the park, sip a favorite coffee drink under a parasol and eat a delicious salad. Or maybe step out from the grounds of the museum and enjoy a bite from one of the various food trucks that call the park their primary roost. This is not to be missed.

In Medellin, art is more than pretty pictures. Here the paint speaks of the hearts and minds of the city itself. Take a graffiti tour to immerse yourself in a rich historical and social movement that’s swept the city forward to a new era. Even walking around the Parque Envigado and Parque Poblado, the local creative talents are a welcome sight.