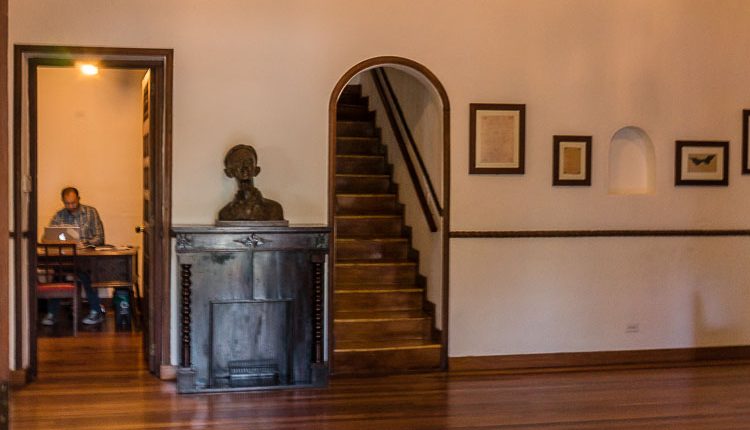 Then in Zona Norte, you’ve got Parque Explora dedicated to science and the Planetarium dedicated to the solar system and universe beyond. Both are extremely informative, interactive and worthwhile visits.

The four museums above attract most of the attention and visitors, and for good reason, they are absolutely worth going out of your way for — but Medellin has a number of other museums that fall under the radar and don’t attract quite as much attention.

I thought it would be good to shine a light on some of these unsung museums — while they might be worth going out of your way for, they can be a fun addition to your day as you explore a new corner of Medellin.

Casa Gardeliana is located up in Manrique, in the foothills above the Jardin Botanico and the Zona Norte. The museum is dedicated to tango music and Carlos Gardel — the French-Argentine singer and actor who was one of the biggest superstars of tango.

Even if you don’t know much about tango and have never heard of Carlos Gardel, I’ll bet that you’ve heard the song “Por una Cabeza” which has featured prominently in many Hollywood films, and was Gardel’s most famous song.

Now you may be asking why there is a museum dedicated to Argentine singer-actor and that country’s most famous tango music — well, Medellin has an interesting connection to the world of tango.

Carlos Gardel was killed in a plane crash at the Olaya Herrera Airport here in Medellin, and forever tied Medellin to the world of tango. There’s actually an International Tango Festival that takes place every year here in Medellin.

The museum itself is small and modest with memorabilia music and artifacts related to the life and times of Carlos Gardel, but I’d say the real attraction is visiting the colorful house in this often unexplored neighborhood, by foreigners, at least.

It’s fun to walk the streets of Manrique, window shopping, or grabbing some street food with the locals.

I’d recommend coming and going via taxi, from the Universidad metro station.

Case Museo Otraparte, located on the northern end of Envigado just before you enter Medellin proper, is a small museum dedicated to the writer-philosopher Fernando Gonzalez.

Gonzalez was born in Envigado, went on to become a judge and then consul in Europe, and was one of the most important thought leaders on Latin American and Colombian identity.

The museum preserves the look and character of the villa he constructed upon returning to Colombia, and while the museum itself probably holds limited interest for a foreign visitor, it’s still a worthwhile visit for a few reasons:

1) The garden that surrounds the house is an amazing respite from a city that is growing and exploding all around — it preserves the look and feel of a different time — and it’s a peaceful retreat.

2) The coffee shop on the grounds is one of the best in the city, with great coffee and ample outdoor seating in the garden.

The museum and cafe are both home to a regular series of interesting cultural events form movie nights, to talks about music, film, and much more.

Afterwards, be sure to head north along Avenida Poblado to visit the Jardines neighborhood, one of the hottest restaurants zones in the city.

A museum dedicated to water, you ask? Yeah, on the surface it doesn’t that interesting, but like Parque Explora or the Planetarium, Medellin does a really good job making these museums engaging and fun.

The main rooms go through the evolution of life on earth and the rise of homo sapiens and then become more Colombia specific as it delves into the various ecosystems of the country and the importance that water plays in Los Llanos, the Amazonas, or the Paramo.

The museum then zooms in even further by talking about the importance of water to Medellin, where it comes from, how it gets here, and what it happens to ensure that its safe to drink (something we should all be grateful for, unlike many other big cities in Latin America).

The museum is located near the barefoot park, and makes for a nice afternoon near Alpujarra as you explore the area.

Located in El Centro, behind the Teatro Pablo Tobon Uribe, Museo Casa de la Memoria is a new and unique museum in Medelin that is dedicated to the victims of the decades long armed conflict that crippled this country.

Even most locals are unaware of this museum’s existence, as it tries to bring forth the heartbreaking stories of the victims of the families that suffered at the hands of FARC, ELN, or the paramilitaries.

If you want to better understand the sad and violent past that made Colombia the incredible, resilient country that it is today, you owe it to yourself to visit Museo Casa de la Memoria.