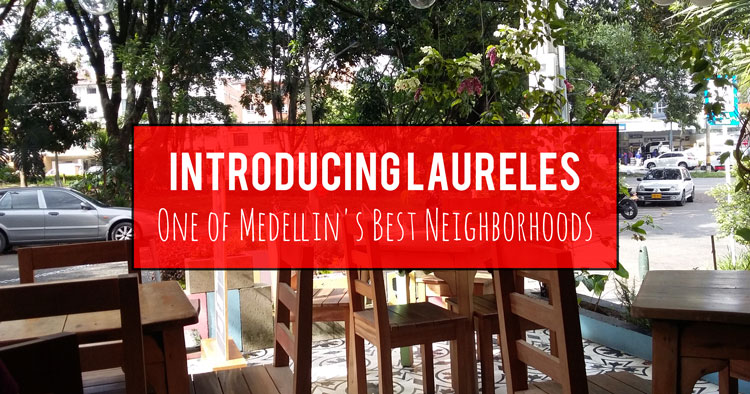 Laureles is located due west of downtown in the flat heart of the Valley of Aburra and has long been considered one of Medellin’s best upper-middle class neighborhoods.

Poblado has always been the hot spot for the upper class or for foreigners coming to visit Medellin for both short and long-term stays. But Laureles has become an increasingly popular home base for foreigners who not only appreciate the cheaper prices but the general quality of life that Laureles has to offer.

Laureles is located west of downtown, across the river. It sits beside UPB, the Universidad Pontificia Bolivariana, which is considered one of the city’s top universities and a popular place to study Spanish.

Laureles isn’t full of the big, flashy high rises like Poblado, but is filled predominately with low-slung residential houses. Despite that though, the atmosphere is more mixed-use, urban, and walkable in nature compared to Poblado. There is still plenty of room for small mom-and-pop stores, bars, and restaurants.

One thing that immediately stands out about Laureles is how the streets defy the normal grid style, abandoned in favor of a maze of diagonal boulevards and circular streets, and which can be somewhat disorienting at first. The design was done by famed Colombian architect Pedro Nel Gomez, inspired by his lengthy time studying in Italy, and giving the neighborhood a decidedly more European flair.

Since the neighborhood is located in the flat heart of the valley, one also immediately appreciates the pedestrian friendly nature of the barrio. The fact that I can walk to everything I need from grocery stores, nightlife, cheap menu of the day restaurants or upscale eats, all within a few minutes make this a neighborhood that is hard to beat in my opinion.

Medellin has been actively expanding its bike share program Encicla and, owing to the flat neighborhood, Laureles is the best serviced barrio in the city in terms of stations and number of bikes, and the neighborhood also features a high concentration of bike lanes.

The heart of Laureles is centered on Avenida Nutibara, which runs diagonally across the neighborhood, and the two main parks, Primer Parque and Segundo Parque, respectfully.

Along the length of Nutibara and the streets around the parks you will find a tremendous variety of restaurants, cafes, desserts, and more.

The closest transportation via metro is either the Floresta or Estadio metro stops, which would be around a 10-25 minute walk depending on where you are coming from — but at least it’s all flat.

The area is well-serviced by a number of bus routes that run along the main avenues, primarily along 80, San Juan, or Nutibara, including an Integrado that takes you directly to the metro stop, and you can buy your metro ticket at a discount as you board.

A Day in Laureles

One thing that I love about Laureles is the sheer number of small, independent coffee shops there are here.

Start your day with Cafe Revolucion, just off Primer Parque, where they have been serving up some of the best coffee in town for the past few years. While the shop is small, it’s very welcoming, with a pair of friendly expat owners and a thriving group of digital nomads that frequent the establishment and mix with locals.

But don’t forget to check out Cafe Cliche, a small French cafe; Cafe Zeppelin, which only recently expanded to Poblado; or Algarabia, a local run coffee shop that serves up Chemex, French press, and some seriously delicious chocolate pastries.

There are a handful of other great small coffee shops, as well as most of the big chains you would come to expect in Medellin — making Laureles probably the most cafe-centric neighborhood in the city.

For lunch, I most often visit the local menu-of-the-day restaurants which serve up a limited selection but for ridiculously cheap prices.

One of my favorites is Palo Santo Gourmet — where you’ll get a soup, a main plate with meat, salad, rice, and usually another side, along with fresh juice, and a small dessert to top it off. They have more creative entrees, salads, and the overall quality is way above average compared to normal. Unbelievably, it only costs 8.500 pesos (less than $3) for all of that.

I’ve been dining out regularly for what seems like forever, and I still have yet to visit everywhere. It’s always tough trying to explore new places or visit old favorites.

New coffee shops aren’t the only thing that has been flourishing in Laureles over the past few years, but new restaurants seem to be sprouting up every time I turn a corner, which I try to explore for dinner.

A recent favorite is Chicago’s Deep Dish Pizza, which serves up an incredibly delicious pie. I’m no expert on Chicago-style pizza, but it’s really good. My favorite used to be the thin crust at Piccolo, but now it’s a tough choice since they are both so good.

One thing I love is the great variety of international cuisine that has popped up here.

Craving Korean food? Korea House offers up the real deal, from kimchi to bulgogi. The restaurant is owned by a friendly Korean couple that fell in love with the City of Eternal Spring.

Hankering for Arabic food? Check out Fenicia for something more upscale, or Full Arabe for a great hole in the wall shawarma place.

I could go on and on, but it’s making me hungry just thinking about it.

If you’ve got room for dessert, head over to Blueberry for some of the creamiest, most-delicious gelato you’ll taste.

Or head over to Astor Reposteria — which is an institution in Medellin, the original is on Junnin Street in El Centro — for the best chocolate cake you’ll ever have.

In terms of nightlife, Poblado and Parque Lleras probably wins. But Laureles is located within easy walking distance of two other main centers of nightlife, La 70 and 33.

Like the rest of Medellin, music is most often crossover, but you’ll find some rock places — check out Pub Rock or Underground — and salsa bars, including two of the best in town, El Tibiri and Son Havana.

There are also some pretty unique nightlife spots within Laureles proper, like Ping-Pong Bar which is one of a kind in the city. Here you’ll find an actual table tennis museum, an area with ping-pong tables where you can play for free, live music at times, cheap beers and cocktails, and some really delicious food. I highly recommend it!

So there you go, just a little glimpse into why I think Laureles is one of the best neighborhoods in Medellin. Whether you decide to stay in this part of town or not, it’s still worth exploring for a whole variety of reasons.

If you’re looking for more info, check out the Ultimate Guide to Laureles.

Need a great place to stay will your exploring Laureles?  Check out these two fantastic loft style apartments.