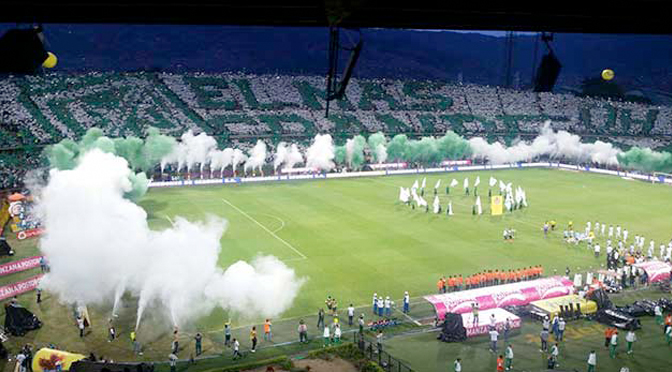 There are only three things you need to know about Colombian football:

When either of these teams play, normal functioning in Medellin ceases to be.  Business is put on hold.  Governmental processes grind to a halt.  People pull over and park their cars.  All because everyone, their mother, and their mother’s mother has set him or herself in front of the nearest TV.  Life takes another meaning for the next 90 plus minutes.

If you’ve never spent time in a true football culture, you can’t begin to imagine the fervor and atmosphere created within an otherwise well-organized society during a football match.

And there is nothing like going to a soccer match between the first two teams. And don’t even get me started on when the national soccer team plays… As is to be expected in a city with two football teams, the rivalry between these organizations is big enough to almost blot out the sun.  These guys despise one another – and it’s an epic experience to see them play.

The fact that they share a stadium, the 45,000 seat Atanasio Girardot, doesn’t help matters any.  The must-see game of the season here is ‘The Paisa Classic’, or El Clasico Paisa.  FIFA recognizes this game as a ‘classic’ match-up, due in part to the notoriously aggressive background of the match but also because these are the most successful teams in Categoria Primera A.

Previously owned by none other than Pablo Escobar, Atletico Nacional is one of the largest and most consistent clubs in Colombia.  Atletico has taken 15 league titles, and 19 domestic titles overall, which makes them the most successful team in the country.  Having won the Copa Merconorte and the Copa Interamericana twice, they are the most internationally winning team as well.  IFFHS ranks Atletico Nacional as the 5th overall team in the America clubs.

A tour through Medellín will confirm their elite status within the hearts and minds of the local population.  Green and white shirts stripes are worn everywhere. You might even recognize Nacho, a green and white striped tiger Nacional calls their mascot, placed around local establishments in anticipation of game days.

The team colors are derived of the flag of both Medellin and Antioquia.  This color scheme, and the club’s nickname, Verdolagas, was coined early in the club’s history (founded in 1947) and associated with the purslane plant.  Antiochia has a great tradition with planting and harvesting flowers, most notably celebrated with the Festival of Flowers and the massive export economy of flowers in Colombia.

This is Medellin’s original football club, founded in 1913, and nicknamed DIM, or The People’s Team.  This last nickname is particularly interesting, considering the club was conceived by a group of wealthy families to create a competitor for team Sporting, aka The Aliens, a local Paisa team created the same year.  Medellin lost this game against the Aliens 11 – 0.

While not a heartening start, the owners soon realized that besides the value to their passions and entertainment, a football team could be a business.  During a time when an egg cost 2 cents, entry for a game between (the then called) Medellin FootBall Club and Team Sporting cost 50 pesos and 50 cents.

Without a proper space to play, let alone balls to practice with, the team took a trip to Bogota in 1914 to acquire 12 balls and to train their skills on a proper field for a season.  So began the modern Colombian sports organization.

Now a five time Primera A Categoria championship winner, Independiente Medellin is a club with a troubled history.  As recently as 1997, the club experienced bankruptcy and voted out its administrative body by force of the fans.  The club has been previously dissolved four times and continues to battle with owners and managers for their lack of satisfying leadership.

Fans are decidedly passionate with their loyalties to The Mighty, as they side with a notoriously scrappy underdog whose very existence is a feat of spiritual athleticism.  Typically underfunded, DIM has always made due with a scrappy combination of grit and resourceful determination to compete against the more comfortable establishment of Atletico Nacional.

Now that you understand some of the context, it’s time to get to the fun part.  I had the opportunity to see the madness that is ‘El Clasico Paisa’ this last year.  Let me walk you through the game-time experience.

The Atanasio Girardot Stadium is located in one of the most central residential areas of the city, the Barrio Stadium Zone of Laureles.  Some fans prefer to watch the game at the nearby upscale shopping mall, or ‘centro commercial’, called Obelisk.  Here, games are projected on giant screens every single week.

Either way, take the metro B line down and exit the Estadio stop, which is right near the stadium.  Or, if you’re coming from Poblado or the downtown area, take the line A and change to line B at the San Antonio stop.  The metro costs 2000 pesos ($1 US).

First thing to note: No alcohol is allowed or sold in the stadium.  This actually makes sense.  Were these matches any more intense, it might become downright unruly and dangerous.

So do as the locals do: drink up before the game.  There are a plethora of outdoor bars surrounding the stadium where drinks are readily available.

If you’re hungry before the game, plenty of typical Colombian munchies are available outside the stadium.  From plates of grilled meats, hot dogs smothered in broken potato chips, empanadas, bunuelos, to ice cream – you won’t be left wanting for satiating gametime fare.

Purchasing tickets is surprising easy – and cheap.  Buy the tickets from the ticketing booths at the stadium.  The day of the game is fine (and rarely sells out) unless it’s the clásico or the final.  Tickets may also be purchased at El Coltejer building in downtown or at El Tesoro shopping mall in Poblado.

In Colombia, the most desirable sections are at the end of the fields – the higher up from the ground, the better the view.  This is where things get really crazy with the locals – fanatical is perhaps a better word.  But this means that the sideline seats at center field are always open!

Face value for tickets, even for a rivalry game, will only run you about 19,000 pesos ($8).  That said, the seats at the end of the stadium is are even cheaper than that.   That said, seating is essentially open within the different sections.

Once you’ve snagged your tickets, the security queue is your next stop.  This may take a bit of time: not only are their a massive number of people trying to get to their seats, but some people feel inclined to cut everyone else, like it was third grade.

Arrive early to ensure that you don’t miss the start of the game.

After about half and hour of this, the police should arrive and keep the orderly progression of men, women, and children moving forward.  Expect a thorough pat-down when you arrive to the front of the line.

If you do like we did and sit front and center, either side of you will be, like magic, sorted by colors – green and white on the left, red and blue to the right.  The atmosphere is going to quite overwhelming, as the energy of 45,000 cheering and rousing simultaneously produces quite a stir.

All that’s left to do is cheer on your chosen team and soak up the crazed energy of this true Colombians past time.  This is an experience not to be missed, the passion is unlike anything else.

Note: Ponchos will be available for sale once inside, pending rain.  A hat, sunscreen, and earplugs might be a recommendation for those with certain sensitivities.  Remember, this is a about a two hour event, so plan accordingly.