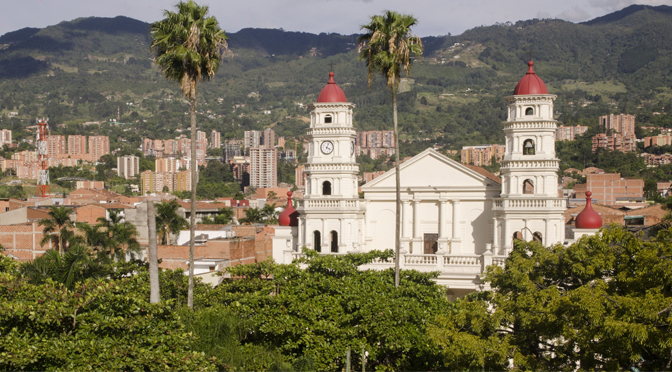 In Medellin? Swing by Envigado and get a taste of the real Colombian culture

Could they whisper in their lush tones, the hillsides of Envigado would tell a story of transformation.  This tale would speak of changing histories and the immutable culture preserved despite the people that had come and gone. Standing among these brilliant green slopes, you might observe that this is a section of Colombian living entirely distinctive of nearby Medellin.

After a brief time here you will appreciate this distinct and pleasant difference.  There’s a cooling mountain breeze coming across the Central Andean Cordillera mountain range, making this feel like a perfect blend between Maui and Aspen.  Amidst winding avenues beset by flowers, an upslope suburb community overlooks the surrounding neighborhoods of Itagui and Sabaneta.

Envigado encircles and overlooks the Medellin valley, laying claim to the Eastern valley slopes.  The heights of these mountains reach 5,495 ft, from the descent of the Rio Negro airport road to the valley floor.  The results of the topography is a tranquil garden community.  Indeed, settling oneself within this section of Envigado necessitates a certain inclination.  It is perhaps the most desirable section to inhabit within all the Medellin valley.

Pablo Escobar chose this area for his primary home.  Indeed, one of the famous Casas de Escobar still stands but has since been repurposed by the local municipality for use as a school. The schools in the neighborhood are renowned throughout Colombia, in fact. Montessori is a great example of this.

Founded in 1775, Envigado takes its name from the large trees once found here which were used for the rafters, or “vigas”, in constructing houses.  In a neighborhood more natural and comfortably residential than any other, one senses a natural, living heritage here.

Heritage that is part of the Paisa community, those Spanish immigrants arriving from Extremadura, Spain in the mid-16th century.  Settling upon the hillsides, the Paisa influence is still very evident.  Within the last 100 years, the Envigado culture has seen a shift in the demographic population.  While those living on the hillsides became decidedly upper class, Envigado used to be totally fields, or “fincas,” operated by the lower classes for those living on the hillside.

While the sprawling verdant pastoral appeal remains, the farming capabilities have since moved outside the Envigado limits. Likewise, the Paisa community has settled in the lower parts of Envigado nearer the valley floor.

A descent from the hillsides remains green, mostly because you drive into Envigado through the famous ‘Tunel Verde’.  This tree-canopied boulevard is half botanical garden, half main thoroughfare into Envigado proper.  Looking up, one can expect a shady arboreal traverse with mature palms, acacias, mango trees, and Yarumo Blanco.

You emerge from this shady tropical route in the other half of Envigado begins: the “mini centro.”

The central community gathers at the Parque Envigado.  This one block plaza plays host to the alabaster Envigado Church on one side and is surrounding on all sides by restaurants, bars, and local merchants.  This is a convenient place to meet up with friends and it’s also the epicenter of public events for the city, including outdoor concerts and the famous Christmas lights display.

Parroquia de Santa Bárbara de la Ayurá is a beautiful historic testament to the traditional Catholic faith in Antioquia.  This neo-colonial parish was founded by one Father Eduardo Toro in 1975. Admired for its beauty and architecture, it is highly sought after location by “society envigadeña” as a place for weddings.

Cultural travellers with an eye for architecture will also appreciate the The House of Piedritas.  Called “the Paisa Gaudi” this home of this Colombian artist and designer stands as testimony to the artistry and imagination of Santiago Rosas, as well as his deep 37-year love of his wife Gloria.  Built of local timbers, river stones, and blending a distinctive Colombian flair for natural elements with European design elements.  This is an exploratory tour of an artist as a man and as a visionary, set within a unique garden atmosphere unlike any other.

Within the surrounding blocks, the subtle lack of foreign influence in Envigado metropolitan area is apparent.  The central neighborhood houses rarely top two stories, which lends a courtyard-esque, open sky feeling.  This is a classically middle class scene, complete with children perched drawing on sidewalks in the afternoons, old gentlemen lounging in a nearby billiards hall, and couples strolling between the palm stands on their way to a snack at the fruit stand or local pastry shop.  Sidewalks are outlined by tropical trees, trimmed hedges, blooming birds of paradise, and miniature brown speckled pigeons meander optimistically underfoot.

With its modern architecture and beautiful sculptures outside, the Parque Biblioteca Debora Arango is a beautiful and recent educational center, complete with an Art institute.  The Parque is dedicated to life and art of Medellin’s favorite daughter, Debora Arango, the painter, sculptor and social activists.  Arango is also set to posthumously grace a monetary note of Colombian currency.

More than just a beautiful building worth a visit, it’s a great resource for all travellers.  While most titles will be in Spanish, a decent selection of classic and modern books are available to any visitor, residents of Colombia or otherwise.

This is also the city of the Colombian philosopher Fernando González. His house, Otraparte, is today a cultural center and museum dedicated to his memory and works.  It’s also home to a delicious cafe and restaurant.

And if you’ve had enough suburban time, a calming respite from this city awaits. A short jaunt outside Envigado central are plenty of areas ideal for hiking, birdwatching, mountain biking, or just relaxing.

Salado Park plays outstanding example of this tranquil yet engaging foothill lifestyle.  Well-paved walking paths intermingle with flower bedecked creekside seating and cool swimming pools.  The park is complete with a restaurant, where you might buy fresh coconuts to sip from or make the local soup: sancocho.  All ingredients and cooking necessities will be provided and you can set up a kitchen-camp at nearby hut with a fire pit.

You can get here via the metro by Envigado stop and taking the green bus to Salado.

That’s a quick cultural tour of the unique areas of Envigado.  While an adjacent city to Medellin, Envigado is like another world; one distinctly old-world Colombian.  With a serene and rustic atmosphere in some places, it will also satisfy a traveller’s curiosity about culture and daily urban life within a slower-paced, authentic Colombian community.