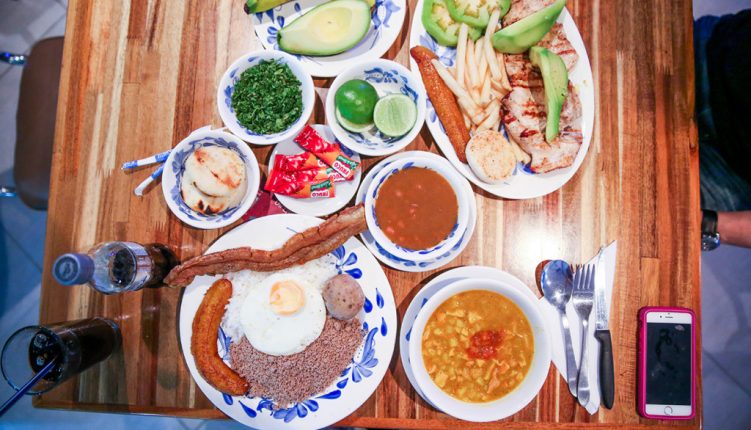 Everything You Never Wanted to Know About Medellin’s Food (But Should Know!)

If you’re a fan of Latin American cuisine, Medellin’s restaurants won’t let you down. Of course, you’ve got to watch how much you eat, because here they like to serve up large portions, and  there is a heavy focus on deep-fried… well, everything.

Starting with a typical breakfast here, you’ll commonly find yourself sitting down to enjoy a plate of arepas with eggs (arepa con huevos), juice, and coffee. Keep in mind, Colombians, despite their reputation for great coffee beans, drink a watered-down version of what you’re probably used seeing (called Tinto, which is discussed further, below).

Meats (beef, pork, chicken and fish) are all wildly popular, with most dishes served with the ubiquitous rice, beans, or potatoes. Vegetables play a smaller role here, but in our opinion, the endless variety of delicious, always-in-season fresh tropical fruits more than make up for any so-called shortage.

What follows is a list of some of the most popular dishes you’re sure to encounter when you arrive here.

Ajiaco is a thick potato-based soup from Bogotá. Inside you’ll taste fresh ingredients, including shredded chicken, corn on the cob, capers, and cream. Ajiaco is served with a side of white rice and fresh sliced avocado, both of which we recommend you mix into the soup.

Ajiacos y Mondongos Arepas are the most ubiquitous Colombian food, served with almost every meal, and when bought on the street (for $1), a meal unto themselves. Arepas are made of ground corn dough or four which is then grilled, baked, boiled, or fried. Arepas con queso (with cheese) are best sampled from street vendors.

In Medellín, you can expect to have sweetened condensed milk drizzled on top, which throws a delicious counterbalance to the saltiness of the cheese. When you’re ready for this culinary kindness, look for the street vendors which are conveniently located, uh, in the street.

Bandeja paisa is a traditional Antioquian dish consisting of beef, pork, or chicken plus chorizo, chicharrón (pork fat), fried plantains, a fried egg, refried beans, rice, avocado, and a small salad. Yes, that’s all one dish and yes, it is hard to finish, so we won’t blame you if you leave a little on the edge of your plate.

Buñuelos are a terrific snack here, all over Colombia, especially around the holidays. Dough and cheese are formed into round balls, and then deep fried. If you like soft and salty, make sure you try one (or six) of these.

Empanadas are available everywhere, from street vendors to cafés and upscale restaurants. Usually fried, some cafés will offer you a baked option. The fillings we keep coming back for include potatoes, ground beef, and chicken. Empanadas deserve a dollop of fresh, spicy salsa on top for maximum enjoyment.

Mondongo is a thick soup which is especially popular in Medellín. Of course, you may enjoy it more not knowing what it’s made of (chopped tripe – stomach lining or intestines) in a broth. Luckily, it’s always served with sides for mixing, including rice, avocado, bananas, and fresh cilantro.

Sancocho is another hearty traditional soup made with assorted meats, which might be fish, beef, chicken, or pork, along with plantain, potato, yuca, corn, and other vegetables. In Colombian homes, it is often prepared in very large pots to feed family and friends. Sancocho is the kind of dish that can take all day to prepare, so we’ve been told.

Trucha is a type of mountain trout, often served in pueblos. Most restaurants will give you a variety of preparations to choose from, and it’s typically served with a large fried plantain. If you’re a fish lover, chances are excellent you’ll enjoy trucha.

Still relatively unusual, a place called “3 Cordilleras” serves up microbrewed beer and delivers an excellent brewery tour, based here in Medellín. Their beers feature stronger flavors than those of the mainstream domestic brands, which you’ll read about below. http://www.3cordilleras.com/tour_cervecero.html

Staying in town for a few nights? Grab a reservation in a luxury apartment you’ll LOVE, right here.

Aguardiente Antioqueño, or guaro if you want to say it as the locals do, is a clear anise (black licorice) flavored alcohol that is available everywhere throughout the country. Inexpensive, and rumored less likely to give you a hangover compared to other liquors, drink it straight and chase a shot with water. You can get aguardiente both with sugar (white bottle) and without, in a sugar-free (blue bottle). Small plastic cups are used for dishing out shots, and it’s a common icebreaker for Colombians to offer guaro to new friends.

Apostol is a microbrew made in Sabaneta, south of Medellín. It is stronger, though not as widely available, as the beers of 3 Cordilleras.

Coffee drinking in Colombia, predictably, is a national pastime. Tintos are very small cups of coffee, often sold out of thermoses by street vendors. Sometimes you’ll see vendors rolling shopping carts down the street with a dozen or more thermoses, trying to keep up with demand. If you’re after something more akin to the caffeine you drink at home, try the chain of Juan Valdez Cafés, which is the Colombian equivalent of Starbucks. Here you can grab a tremendously wide range of hot and cold coffee options. And like Starbucks, these cafés  feature free Wi-Fi for customers.

When we travel we like to do as the locals. It makes a tangible difference, versus spending your time (and usually money) attempting to get all the familiar flavors of where you came from. The same applies to drinking beer. Here you’ll find a variety of domestic beers, including Pilsen (made in Medellín), Club Colombia, Aguila, and Costeña. Sadly, they all taste similar. Club Colombia always costs a little more than the others and makes you smarter when you drink it in vast quantities.

Fresh fruit juices are available everywhere, and because they cost only a dollar or two per drink, it’s easy to forget just how special these are. Most of these juices are prepared with either water or milk, though some fruits go better with milk than others. The ones you’ll see the most, include: Orange (naranja), Strawberry (fresa), Lime (limón), a Colombian equivalent to lemonade – Coconut and Lime (coco y limón), Raspberry (mora), Pineapple (piña), Banana and Mango, Passion fruit (maracuyá) and Soursop (guanabana).

Hot chocolate and cheese might seem like an odd combination, but it’s surprisingly tasty. Traditional Colombian hot chocolate is made without added sugar or milk, as is common in Western countries. Drop in pieces of soft white cheese, and allow them to soak up the favor for a minute before scooping them out with a spoon.

Añejo is almost as ubiquitous as aguardiente in the paisa drinking culture. The sweet golden-brown rum tastes great straight, on the rocks, with water or soda. We like it best with Sprite or Canada Dry. In neighborhood bars, like those found around Parque Envigado, your drink choices may be limited to aguardiente, rum, or beer.

Check out some amazing apartments nearby all the tasty action.. See More

Wine is available in the grocery stores, and increasingly, specialty wine shops around Parque Lleras. Wines from Argentina, Chile, and Spain are more widely available than those from other countries.