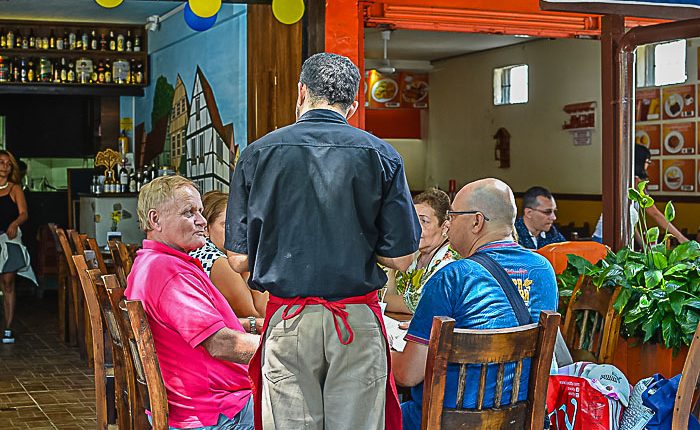 Everyone always asks whether you need to know Spanish in order to travel in Colombia.

The truth is that you can get by with a very limited amount of Spanish, although you might be relying a lot on gestures and other common traveler tricks in order to get your point across, order the meal you want, or find what you are looking for at the local tienda.

Many Colombians don’t speak Spanish, and even if they do have a basic command of English (perhaps even better than your Spanish), many are shy to speak English.

My advice to anyone traveling to Colombia is to learn as much Spanish as you can before arrival, and then to keep learning as much as you can when you get here.

Having a basic command of the language will make your day-to-day life easier in Colombia, but if you can gain a higher proficiency, you will open up a whole new world.

But the tricky part about Spanish is that what the people say on the street isn’t the same as what you learned in your textbook. Even worse, every country in the Spanish speaking world has different accents, different words, and different challenges, many countries even have huge differences between regions (just like in the United States or Great Britain).

In today’s lesson, we will be looking at a number of classically Colombian words which will help you sound more like a local, and perhaps make the people you are talking with think you know a lot more Spanish than you actually do.

Berraco is an adjective for somebody strong, resilient, or audacious, someone motivated and entrepreneurial for instance. “Ella es muy berraca” means she is very strong or admirable.

All of them are popular Colombian slang that basically means “how cool”. So if someone asks you how you like Medellin, you might respond “Me gusta mucho, es muy chevere aca”.

Vaina means a “thing” but it is usually used as an exclamation for something bad that happened. Like “Que vaina que le paso eso” — how terrible that that happened to you.

It’s not as bad as it sounds at first. Del putas means that something is extremely incredible. It could be an event or an object like a t-shirt. If someone says they won’t go somewhere or do something “ni por el putas” that means they wouldn’t do it even if the coolest thing in the world was waiting for them there.

Vieja means old, so you may think that “una vieja” is an old lady, but it’s actually used for young women. Synonyms would be mujer, chica, or pelada.

Mecato are the little unhealthy snacks, chips, and sweets that you eat between meals or buy from the little corner stores.

Parcero or parce is what Colombians call their good friends, they might

Guaro is shorthand for aguardiente, which literally means fire water, and is the drink of choice for many in Colombia. The only question about what to drink is tapa azul or tapa roja?

After a little bit too much “guaro” you’ll be feeling enguayabado the next day, that is to say, hungover.

For many Colombians, pola is slang for cerveza, or beer. Maybe instead of a night out with a bottle of guaro, they go out for some polas like Aguila, Pilsen, or Poker.

No dar papaya is a common refrain in Colombia, which literally means “don’t give papaya” because if you do, someone will take it. Papaya refers to anything of value, like if you use your cellphone on the street and then get robbed, you were giving papaya, so of course someone took it.

For women they say “viejas” and and for the guys they say “man”.

Parche is an enjoyable activity with friends, say your out dancing with some lady friends, or having a great night out with your buddies on the town, you might say “Que parche!”

Colombians, more often than not, don’t drink real coffee but rather drink “tinto” an instant coffee loaded up with sugar that you will see sold on the street or virtually any panaderia or tienda.

Rumbear means to party, and rumba is the party. This weekend you should get your friends together and go drink some polas or guaro before you head out to rumbear and have a great parche!

Grillos are crickets, but grillas are the young, scantily clad women who stalk the streets searching for a sugar daddy.

Guevon basically means idiot, but it is frequently used among good friends. Be careful how you use it though, because you might insult someone if you use it too casually.

So there you have it, an introduction to some of the most common Colombian words or expressions.

If you start dropping these into your daily conversations, you’ll be able to give the impression that you’re far more Colombianized that you might actually be, and you’re likely to break the ice and impress people when you start speaking more like them.

Do you have some favorite local expressions? What would you add to the list?