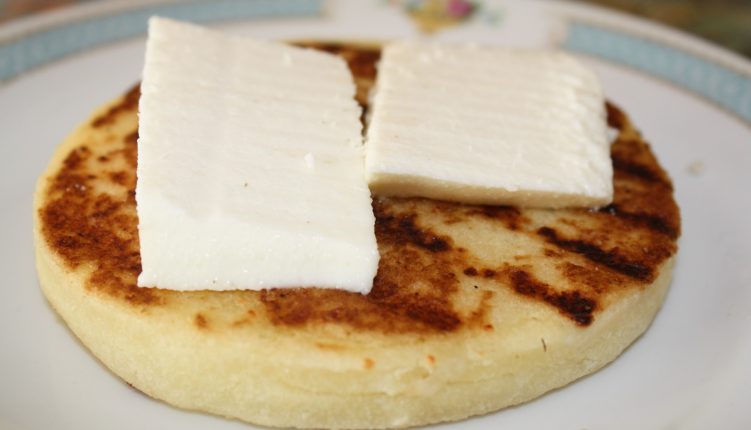 One of the most important facets of travel is food. Particularly because it’s one of the most diverse aspects of life, and this diversity is mainly expressed through different cultures. By far, the arepa is the most traditional and well-known food in Colombia. There are many variations of arepas, but the Colombian arepa is, at its core, a doughy cake made from corn that is commonly eaten alongside the main dish or acting as part of the main dish.

The closest way I could describe an arepa to someone who has never tried it would be that it is like a really thick corn tortilla.

If you are traveling through Colombia, you will undoubtedly encounter the Colombian arepa. Although there are many variations, which we will discuss shortly, the Colombian arepa holds a mixed opinion among many foreigners with those that either love them or hate them.

I’ve heard some disparage the arepa as being bland, flavorless, or like eating cardboard. Now that might be true if you are eating the arepa plain, but that would be akin to eating a slice of bread with absolutely nothing. Even with a slice of bread it is usually topped by butter or jam, at minimum, if not meat, cheese, mayonnaise, mustard, and more.

It is important to compliment your arepa with something else (just as you do with bread) in order to really enjoy it. I too was one of those gringos that didn’t exactly love arepas the first time I tried them, but they quickly grew on me, and I actually enjoy them now — they are my go-to breakfast while living in Medellin.

Due to its base being so flexible with fillings, there are understandably many types of arepas for you to choose from. The below list includes some of the main regional variations of arepas, so be sure to taste a few of them during your stay. But there are more than 75 different variations of arepas throughout the country, so you’d be hard pressed to try them all.

With festivals that are made for the food, the arepa de huevo, or egg arepa, are a famous arepa choice along the coast of Colombia. What differentiates them is a thicker dough and cracked egg that is “stuffed” inside before being fried.

These things are truly delicious (and obviously not healthy), but it’s great to grab one from a vendor on the beach as you sit back and watch the waves.

The de Arriero has one of the longest preparation times out of all Arepa’s, and for good reason, they taste great. With up to five days of its dough being moisturized in water, the de Arriero is best served with a lot of meat. These are thicker and rounder arepas than the big flat ones that you may be familiar with.

The Paisa Arepa is made of with white or yellow corn maize that is often served with traditioanl Colombian traditional sauces and meats as a topping. You will find these arepas in abundance throughout Antioquia.

This is perhaps the most well-known arepa throughout Colombia and is also often eaten for breakfast by many in Medellin.

More often than not it is toasted over a burner, then slathered with butter, a chunk of fresh cheese like queso or quesito (two different variations), and then sprinkled with salt. I usually just top mine with cream cheese at home for an easier spin.

Originating from Boyaca, hence the name, these arepas are differentiated by their very crisp exterior. When bit into, salty cheese oozes from the middle. One thing that is also unique about the Boyacense is the sweetness in its flavor which derives from the cornmeal, flour, sugar and cheese that it is made from.

Perhaps one of the most distinct arepas, is the Santandereana. Made with dissolved ash and yellow corn flour, this arepa is mixed with pork crackling and then browned without oil.

Even though we have been focusing on Colombian arepas, it is worth mentioning the Venzuelan arepas as well, since they can be found in many cities throughout Colombia.

And because the arepa is also strongly linked to Venezuela and the countries have often has a strong debate with regards to who first originated the dish. Due to the two countries sharing land during the time it was created from the indigenous, the answer is still unknown. But it’s safe to say that the arepa is very important throughout this northern region of South America.

When you visit Colombia, you must try some version of the arepa… Along with all the other amazing food that Colombia has to offer. They are a renowned national staple food choice for a reason, and you’d be doing yourself a disservice by not experiencing them. Due to their nature, they do have many variations. This will especially apply if you’re traveling around the country as different locations will tend to have more of certain types.

Have you tried arepas? What do you think of them? Sound off in the comments below.