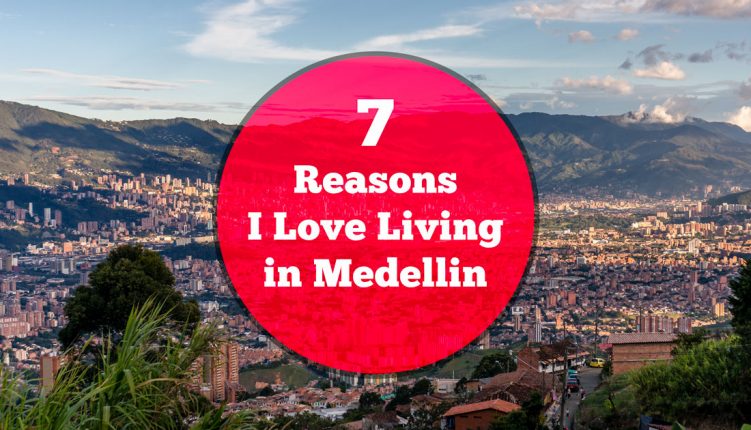 Whether you’re a digital nomad or a retiree looking to settle abroad, Medellin, Colombia might not immediately jump out as somewhere that should be at the top of the list, but I think it’s one of the best places to live.

I’ve now lived in Medellin, Colombia for more than two years in total, and I really do love it (if not, I would have gone somewhere else!). Whether you’re settling down for the long-term or just on a short visit, I think you’ll love these aspects of Medellin, as well.

Here are a few of the reasons why I love living in Medellin, Colombia:

While living abroad, I don’t want to have to worry and stress about getting around the city. Owning a car is not a necessity, thankfully, as the public transport throughout most of Medellin is among the best in the world.

There are countless bus routes that serve almost every corner of the city and take you wherever you want to go.

Medellin has two metro lines — the only such transportation system in Colombia — that run through the heart of the city and will get you to most of the major sites and attractions.

Beyond that Medellin features the metro cable (gondola) connection that will take you high into the hills, and also includes integration with street cars and even a bus rapid transit (BRT) system with designated stations and dedicated lanes.

Even the taxis, which are cheap and plentiful, operate on a meter that tells you the exact price of the fare, so there is no haggling over prices (always a nightmare as a foreigner) or tricky codes to decipher.

A City of Innovation

Let’s not forget that just two decades ago, Medellin was the world’s most violent city, a place controlled by drug lords and insecurity.

While things aren’t perfect here, it is a forward looking, progressive city that is eager to shed its bad reputation and take on the role as of the world’s most innovative cities.

It seems like every year they’ve got a new plan to transform part of the city, from public transit to public spaces and parks like the Parques del Rio.

In turn Medellin has also become one of the leading tech and start-up hubs in all of Latin America.

It doesn’t matter if the transit is good and the city is on the cutting edge of innovation if the people are terrible to be around. Thankfully, that isn’t the case in the Medellin. The local Paisas are some of the friendliest and most generous people I’ve encountered on my travels.

Incredibly, even though the city contains some 3-million people, you still feel the friendly warm hospitality everywhere you go.

People say hello to each other as they board public elevators, they chat about life and family at every small store, people will invite you to eat with them or have a shot of guaro, or they will chat with you throughout your whole taxi ride.

Even though I’ve been here for two years now, I’m still always surprised at the frequent gestures of hospitality and kindness from strangers that you almost never see in similarly sized cities in the USA.

Colombian food isn’t exactly world renowned, and sometimes it even gets a bad from foreigners for being too plain and simplistic.

Sure, the local cuisine isn’t as full of flavors and spices as say Mexican food, or Indian food, or others, but it’s all hearty and delicious. For a typical menu of the day you can expect a generous portion of meat, rice, salad, plantain, a side of soup or beans, and a flavorful, fresh fruit juice to drink.

Best of all, it’s cheap! You can expect to pay around $3 for all of that.

But even if you don’t love the local food, Medellin has been exploding with great restaurants and cuisine from all over the world. You can get southern BBQ, Italian, French, Mexican, Indian, Korean, Vietnamese, and so much more.

Just walk into the Mercado del Rio and be blown away by the gastronomic options in front of you.

They’ve also got a number of truly world-class dining destinations where you can experience molecular gastronomy for but a fraction of the price you would pay for it in the USA.

Medellin is famously known as the City of Eternal Spring, and features a relatively stable year round climate, with weather that is almost never too hot or too cold, thanks to its tropical climate located in the mountains (about a mile above sea level).

Its location in the tropics means that sunrise and sunset never changes throughout the year, so there are no seasons, except for a rainy or dry season.

The rainy season generally means a late afternoon or early evening downpour but it lets up relatively quickly and it usually doesn’t rain in the mornings through the early afternoon.

Medellin has been getting hotter over the past few years though, and Paisa old timers will say that the temperature used to be perfect, but now it is more like the City of Eternal Summer.

I love looking out my apartment window and seeing the big green hills rising up on all sides of the city, or looking at night and seeing the twinkling lights of the neighborhoods above.

While maybe this won’t be among everyone’s favorite things about Medellin, it is certainly one of mine. I don’t like plain, flat cities with nothing around, and thankfully Medellin offers an interesting geography that allows for a number of practical benefits.

First of all, the upper reaches offer an incredible view of the city. Whether you head to the top of the metro cable and are looking down, or just coming into town for the first time from the airport, the view allows impresses me.

Second of all, the geographic variability of the surrounding area offers one the perfect chance to seek out the temperature or climate that suits them. Obviously you could live higher or lower in the valley, but you can also take short day trips outside of the city.

If it’s too cold in Medellin, you can make a trip out to Santa Fe de Antioquia and soak up the warmth and sun of this little pueblo that sits at a lower altitude.

If it’s too hot in Medellin, you can hop in the metro cable and go visit Parque Arvi or Santa Elena and find a cool mountain climate.

The Cost of Living

This is certainly the icing on the cake for living in such a cool city. Simply put, things are much more affordable here in Medellin than they are in any similar sized city in the United States.

Like I mentioned earlier, you can go out to a regular restaurant and have a big lunch with soup, and drink for about $3.

You can take a taxi from one end of the city to the other, say Laureles to Envigado, for just about $7.

My three-bedroom apartment cost me around $320 per month. My friends back home in Seattle are paying $1,000 for a studio apartment.

You can go out to a nice restaurant and spend about $10-15 per person for a really good meal.

I even got a dental crown done for just $200 here, something that would have easily cost me $1,000 or more in the USA.

All-in-all things are but a fraction of the price as they are in the USA.

Medellin is truly an incredible city, one that I’m happy to call my home away from home. If you’ve never been to Medellin, I’d encourage you to finally come check it out.

There is tons of art, museums, cultural events, and so much more to what makes for a vibrant and incredible city.

If you’ve been here, then you already knew all of these things, and probably have another half a dozen things you love about this city that I left out.