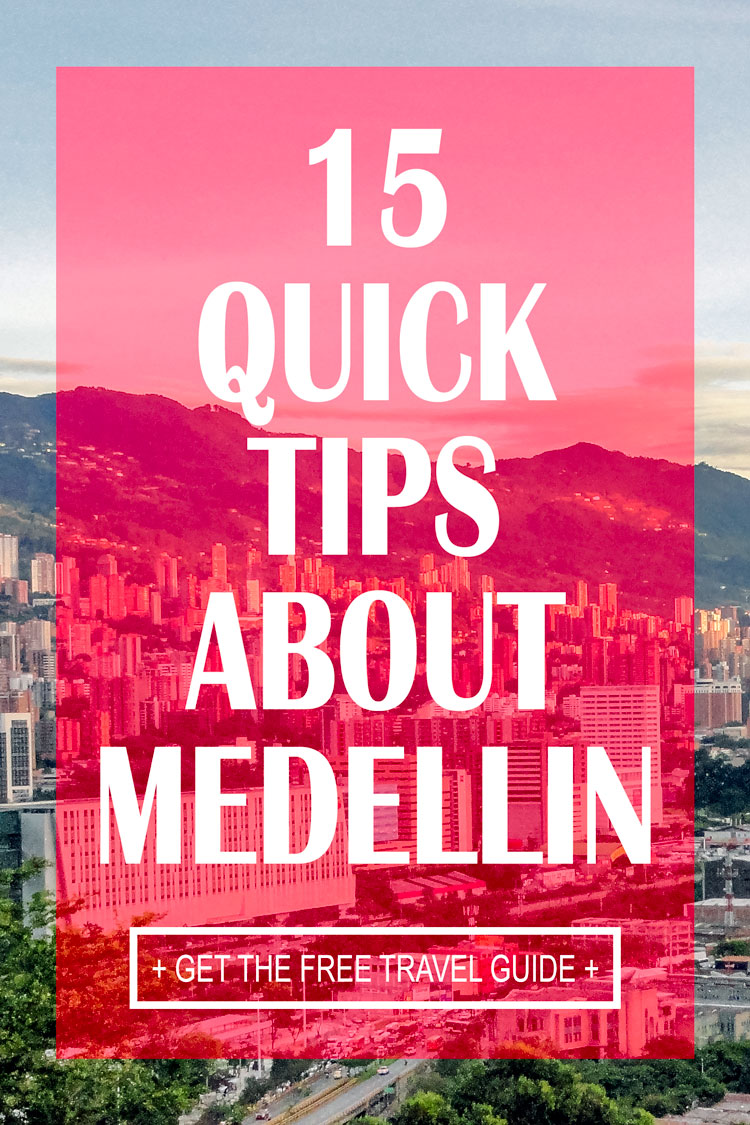 There are so many exciting aspects to the daily life for travelers here in Medellin, it can be easy for us “experts” to forget about the basic info you need for a successful first visit. So this article is our attempt to do that, hitting many of the details and a few quick facts about Medellin that you’ll want to “arm” yourself with, before arriving in this wonderful city.

First and foremost in many people’s mind is the issue of whether they can walk around without feeling nervous. This is mostly because long ago, Medellin was once the murder capital of the world.

However, that has completely changed (the current murder capital is San Pedro Sula, in Honduras) over the past few decades. In fact, Medellin has changed so much it has nearly fallen off the rankings entirely. (Several U.S. cities are rated far more dangerous than Medellin. Wikipedia)

Medellin has never been safer and it’s quite common to see foreign women walking about the city, alone. That said, common sense prevails, just like in any other large city: don’t flash a lot of cash, be aware of how others see you, and be aware of your surroundings.

Bottom line, if you don’t go looking for trouble, your chances of finding it are pretty unlikely.

Many Western foreigners can stay up to six months out of any calendar year with a tourist visa.

The initial permission is typically granted for up to three months, but you can request an extension at any immigration office (located in any large city) without having to leave and re-enter the country.

Check with your consulate just to be on the safe side.

The tap water in Medellin is potable and is among the best quality in the country. This means you don’t have to constantly seek out bottled water, nor worry so much about getting sick from the water used to wash fruits and vegetables.

This news frequently surprises new visitors to the city who are accustomed to traveling in Mexico or other Latin American countries.

Water quality in other parts of Colombia should be treated as suspect though, particularly along the coast where the infrastructure is not as developed.

What do you get when you mix a Spanish heritage with exotic ingredients and African heritage?

Answer: amazing cuisine, like nothing else you’ve ever experienced! Your epicurean journey should start with the endless variety of fruits and vegetables unknown to most places in North America and Europe.

Be prepared to indulge in these at a fraction of the price you might expect, too! Fruits freshly picked include maracuyas, curubas, pitahayas, pinas, kiwi, guanabanas, blackberries, granadas, granadillas, papayas, anones, and much more.

The great thing about Colombian foods is that since they don’t have the “advanced food industry” as other developed nations, much of it is what we could consider “organic.”

As for other options, be sure to sample tamales—Colombian style—and bandeja paisa, ajiaco, viudo de Capaz, cocido Boyacense, cuy, arroz con coco, and other delectable delicacies that also will help your Spanish language skills move in the right direction.

Colombians come in all colors, with some distinct regional differences. You will find almost white European-blooded Colombians, black Colombians, indigenous Colombians, and the most common, the mestizo or mixed blood Colombians.

Colombia has had more time than other countries to integrate different races than other cultures, having abolished slavery way back in 1853. There are mixed race couples who are also Colombian and all races do live at peace here in this culturally diverse country.

Like many other small countries, the inhabitants are Colombians, and everyone else from beyond the borders are considered foreigners, and probably considered gringos even if they hail from Australia or Europe.

Foreign visitors have become much more common place in recent years though, and don’t attract quite so many inquisitive stares as before.

One of the proudest developments for Medellin’s poorer mountainside dwellers was the creation of a gondola lift system and, separately, an escalator that transformed the journey for the city’s poorest citizens who used to endure a lengthy walk up and down the steep areas where they live.

The Medellin Metro Cable system consists of three separate lines and carries thirty thousand people every single day. The Metro Cable is an integrated part of the Metro system and allows quick and efficient transport across the valley floor.

If you visit, be sure to take a ride all the way to the top, where gorgeous views will fill your camera in short order.

Chances are, if you’re already on the road in Latin America and enjoying the low costs from country to country, you won’t experience much in the way of surprises here in Medellin.

From food and movies to dancing in nightclubs, even traveling by plane and staying in luxurious penthouses, Medellin is very reasonably priced.

In fact, we are sure that for less money than you’ll easily spend in other countries, you can stay in 5-star accommodations that rival what you might find in most cities across the world!

Check out some of the amazing short-term apartments available now in Medellin. Click Here

If we don’t mention it here, you’ll ask about it later: Medellin is ranked #5 in the world for “physical adjustments.”

The doctors who provide cosmetic surgery are among the busiest in the world, and that art form is on display everywhere you can lay your eyes here in Medellin.

Procedures that are popular today include liposuction, breast enhancement and butt-implants. While Colombians are the majority of the patients, Medellin is experiencing something of a boom in cosmetic surgery tourism as well.

Plus, there’s something about the culture which lends itself to a proud, sassy woman who invests a great deal of time (and money) to cultivate their sexiness. Colombia is known around the world for beautiful women (Miss Universe 2014 is from here) and when you’re on the streets, you’ll definitely see what we mean.

Colombians love their shopping malls, and since Medellin is the fashion capital of the country, it’s easy to find yourself in one of their many upscale locations.

Given that Medellin is also where many undergo cosmetic surgery, the city has a reputation for beautiful women. Those attractive women definitely need places to shop, and Medellin has no shortage of modern malls.

If you’re eager to shop or just wander around, the places to go include El Tesoro, Santafe Mall (pictured above) and Centro Commercial Los Molinos. Check out the 7 Malls You Can’t Miss in Medellin.

Some of these newer malls have nightclubs on their top floors, and you can learn more about those here.

Local time is -5 GMT, which is aligned with East Coast time during the winter months, and then Central Time once day light savings kicks in.

If you are from the USA or Canada, the similar time zone is great because you can easily coordinate phone calls back home, business calls, or even watching live sporting events on TV, without having to adjust your schedule.

The Colombian peso is the only currency accepted at local stores. ATMs are everywhere and they accept international debit and credit cards. Thanks to a particularly strong exchange rate, the dollar goes much further here.

You can use SIM cards with a cheap pre-paid phone you can buy locally while in Colombia. If your phone is unlocked, you can buy a new SIM card in town from any cell phone store, for just a few dollars and then recharge minutes.

Colombian law dictates that all phones sold here are unlocked, so you can move between operators and more easily use the phone in another country (even the USA).

Also, purchasing “minutos” is easy in any local store. The best services I would look at are Tigo, Claro and Movistar (ranked in order of what I would use).

For those unfamiliar with the driving in countries other than their own, we’ll go ahead and warn you: in Medellín the roads will appear to be completely chaotic.

The good news is, there’s a method to this madness, and especially in Medellin, you’re in luck: Medellin is the only city in Colombia which has a metro system, and a damn good one at that.

If you’re going further, we love Jetblue and Spirit airlines, which happen to have daily flights to Fort Lauderdale, Florida. You can grab one of these flights often for under $200 and move back and forth in just about four hours.

It’s important to know that streets are “calle” and “carrera” in Medellin, and are numbered rather than named. The calles run East to West, while the carreras run North and South.

If you’ve got to refer to a location, you’ll find that locals typically name the cross-streets. So, the address of a restaurant we love, Carmen, is Cra 36 #10A-27, Poblado. This means you’ll eat well on Carrera 36, number 27, near the intersection with Calle 10A.

Unlike other cities in Colombia, cabs in Medellin display the rate in local pesos, there is no need to haggle with the driver over the price (like Cartagena) or decipher how much a coded number costs (like Bogota).

Also, if you’re going to be using taxis, take a moment to download one of several mobile phone apps which make ordering a car a snap. And take our recommendation to use “Easy Taxi,” whose features are a lot like Uber, allowing you to call a secure cab using your phone’s GPS location.

Speaking of low rates for transport, you’ll enjoy knowing a 10 minute trip will run about 5,000-10,000 pesos, or $2.50-5.00. While you can summon cabs from the streets, the app is easier and a tad more safe, since drivers are linked into the system via their license plate.

The locals from Medellin are known as “Paisas” and are particularly polite. They say “muchas gracias” (thank you very much) and “con mucho gusto” (you’re very welcome) all the time and we certainly recommend that you join in this warm tradition as well.

Learning the basics of Spanish is always recommended and will go a long way in showing your respect for the local culture and people.

When you’re talking to Paisas, we’ve found it’s best to avoid bringing up Medellin’s notorious past—the drug cartels and FARC. The people of Medellin mostly want to focus on the vast improvements and generally don’t relish another discussion of those well-worn topics.

This certainly isn’t the definitive guide for the Medellin traveler, but rather it’s meant to serve as a jump-off point for encouraging you fence-dwellers who may be considering coming to this beautiful and rugged land.

While there are more than a million visitors (and growing) each year, the true beauty of this land is it’s people, and longer stays (or ones with open-ended departure dates) will give you the flexibility to truly enjoy and feel the vibrant glow that we’ve fallen so deeply in love with.

Naturally, part of the experience is having a terrific landing pad to sleep off your adventures. If you’re ready to see what’s possible for where you’ll stay when arriving at Medellin, check out some of the luxurious possibilities, right here.