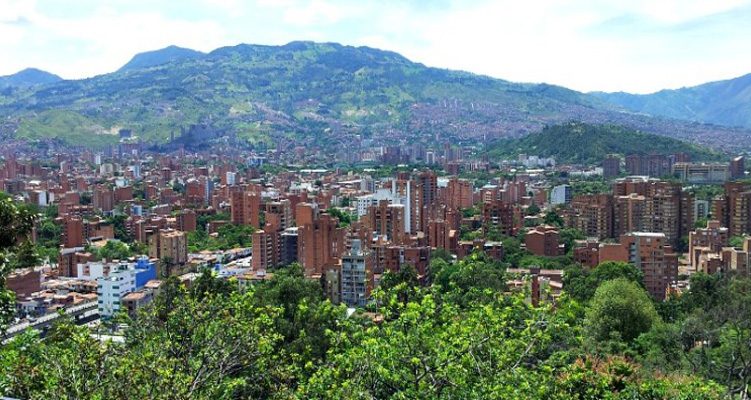 Medellin, Colombia is quite possibly the best place in the world to retire–and more and more people are talking about it with each passing day. One particularly appealing area you might be tempted to make your future home is in the leafy upper-crust stratus, El Poblado (Medellin is made up of six levels of neighborhood, each is a different numbered “stratus”). In this popular spot, you can enjoy the best the region has to offer, from shopping malls and nightspots to open-air markets, local wine, coffee and some of South America’s best weather. Many of Colombia’s more wealthy families like to maintain a home in this stratus. You’ll be mingling with a rather good class of people, which always makes the amenities and restaurants better, in my experience. Overall it’s impossible to miss: this is a land of transformation, a cosmopolitan spot on the rise.

Home to beautiful women and a vibrant, friendly culture, this salsa town is tops for fashion and technology on this continent, and it’s real estate market is just beginning to heat up. Old problems that held Medellin back, have mostly disappeared. For instance, crime is at all time lows, and areas which used to be unfriendly for even police, are now de-fanged, with tourists snapping photos and attractive gondolas zipping up and down the hillsides.

Specifically, here’s why we say Medellin qualifies as not only a top retirement option in South America, but, in fact, is the world’s best retirement choice right now:

1. Great weather. This region enjoys one of the most stable climates in the world. Since it’s at 5,000 feet above sea level it enjoys almost unlimited sunshine every year, meaning more sunny days than almost anywhere except for places like California and Thailand. As a result, the Medellin people or Paisas have a long standing reputation as a top destination for warm weather escapes, no matter the time of year. Among European sun-seekers and American it’s becoming a top winter retreat for those looking to escape the coldest months. Medellin is also a popular holiday destination among the Colombians year-round, and the Spanish love the region’s consistent weather.

2. Safety. Medellin was once a dangerous city, especially if you were in the drug business. Expats from the 80s like to argue that much of the violence was restricted to the drug gangs, and civilians were relatively safe. Well, today the drug gangs aren’t gone, but they are quiet and as a result, Medellin is safe again. Today, violent crime is rare, and petty crime is limited to street crime during the busy tourist season.

3. Good infrastructure. Medellin, it could be argued, has experienced a massive renaissance and incredible infusion of important infrastructure investments, specifically in the country’s highway metro system and other public works, such as libraries. It’s easy to get anywhere in the city, and the updated air travel system means you’re only 3 hours from Florida. This could be a great base for exploring all of South America. And if you didn’t know, South America is one of the most diverse and bio-friendly places on the planet.

4. International-standard health care. Medical tourism is a growing industry in the region, particularly if you are interested in the aesthetic cosmetic procedures, but really everything is possible. The author recently met an American down for a hip replacement, which was 60% cheaper than back home, but the doctor and facilities are equivalent. Further, this American went on to say, he’s turned the surgery into a semi-vacation, since he’ll be here for several months after the surgery, for follow up treatments and to enjoy the temperate weather as he gets his legs back under him. I expect he might look at buying real estate before he leaves, it’s just that great here. Also available are dental specialists, one thing I’m told Obama care doesn’t quite cover in the States. The world over has seen a trend upward in dental costs, so no matter where you’re from, this paradise might make a great dual purpose destination, and who knows, you could even save so much money as to make the trip “free.”

5. Museums. The region boasts a number of fantastic museums, notably ones which highlight the change and forward progress that Medellin has made in their city. Medellin’s museums are often adjacent to their award-winning metro system, which is an attraction unto itself, and generally recognized as a top example for city planning, lauded by the entire world.

6. Great Parks. You can’t go far without finding a wonderful park in which to rest your weary bones. These green spaces have been placed throughout the city, to offset the concrete jungle and give travelers a break from the monotony. If you head up the gondola, you’ll see cliff-top vistas which are spectacular. Most parks are safe during the daytime while a few might have a seedy feeling to them after dark. It’s easy to get to know the city, and you’ll have a strong sense of where you enjoy most, in no time. In fact, one kind characteristic of Colombians is to protect their visitors, so if you stray the wrong way, they’ll likely guide you back on your path. Many of the best parks have restaurants or snack bars, sometimes open only seasonally.

7. Affordable cost of living. The cost of living in Medellin is among the lowest in the world, on average 30-50% lower than in many first world countries. A retired couple could live here comfortably but modestly on a budget of as little as US$1,500 per month. With a budget of US$2,000 per month or more, you could enjoy a fully appointed lifestyle in the heart of Medellin. For those with more money in their pocket, the type of life which becomes possible here, might never even have been imagined back home in your neck of the woods. Luxuries like maids to clean your home, do your shopping, even a chef or masseuse and driving you around the city are among many of the options you’ll happily enjoy in this inexpensive paradise.

8. English is not widely spoken. And this is a good thing, since learning a language is one of the best ways to stimulate your aging brain. While you could stick to the tourist areas, mingling with other foreigners in town, speaking plenty of English, we hope you’ll go ahead and commit to broadening your horizons and leveling the linguistic playing field to your advantage. Thanks to Colombia’s kind people, you’ll never have a shortage of friendly folks with which to practice your budding language skills with. Unlike a lot of cities and countries we’ve traveled to where it can be rather difficult to get people to talk to you, South Americans in general, and Medellin residents in specific, are eager to notice and talk with foreigners. They’re patient people and universally impressed that you’re taking the time and putting in the effort to communicate with them in their native tongue. You’ll feel great to make these connections, and rewarded with your hard work, every time.

9. Healthy living and eating. The Colombians have an incredible arsenal of fresh fruits and vegetables. They also love to eat fish and red meat, fresh meats of great variety is available in all the ever-present daily markets. In addition, the abundance of sunshine in this part of the world means an abundance of fresh produce is also available in the local markets. Green vegetables, fresh fruits and inexpensive meats all make for an attractive combination of options for saving money, eating in and living like a king, on far less than most developed countries.

10. Retirement income is not taxed. Recent legislation allows resident foreign retirees to receive pension income in the country tax-free. The law also provides for reduced taxation on wages, intellectual property, interest, dividends, and capital gains. This alone is a big reason you might seriously consider the life to be lived in this wonderful city. Avoiding taxes and having such a low cost of living is one of the biggest factors as retirees talk about choosing a home abroad once they’re on a fixed income. And if you’re not, wouldn’t it be great to avoid giving a huge chunk of your money away each year?

11. Severely undervalued property market. I could talk on this issue all day. In fact, seeing a massive opportunity to invest in the housing market here in Medellin is what took me out of retirement and back into business. When I got started down here, I worked for five years straight without a day off. It’s safe to say real estate in Medellin is undervalued and among the most affordable right now. Further, Medellin real estate has one of the most favorable price-to-rent ratios (a measure of the profitability of owning a house) and price-to-income ratios (a measure of affordability) in the region. What that means is that housing is cheaper to buy and investors can make more money from rentals than in many other countries.